The makeover that went horribly wrong for Palin 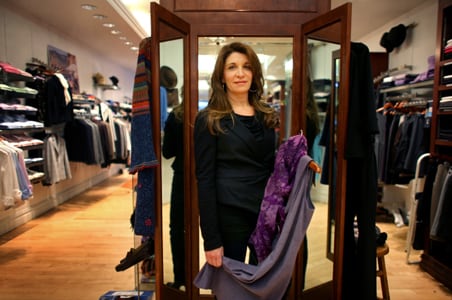 New York: The most elusive fashion stylist in America was nervous. Sitting on a reporter's sofa, dressed in yoga pants and a hoodie, she tucked her slender legs underneath her, averted her eyes and explained why she had decided to out herself after avoiding the spotlight for so long.

The most elusive fashion stylist in America does not have a reality show, nor does she dress starlets. She is virtually unknown. But she was in the right place at the right time, and now her work is history. Lisa A. Kline, 47, a Manhattan mother of three, is the wardrobe consultant who made an Alaska hockey mom-turned-governor named Sarah Palin into chic vice presidential material for the Republican National Convention in September 2008, and in doing so inadvertently set off a furor.

"Wardrobegate," as Kline's $150,000-plus fashion transformation became known, undermined Palin's carefully crafted homespun image when the news broke two weeks before the election. Details about pricey designer clothes and a whirlwind $75,062 trip to Neiman Marcus outraged both Democrats and Republicans and may have played a role in derailing Sen. John McCain's presidential ambitions. The Boston Globe recently called it "the most damaging piece of information about" Palin to emerge from the 2008 campaign. In her new memoir, "Going Rogue," Palin is still trying to distance herself from the incident.

It was a "trumped up controversy," she writes. "I never asked the New York stylists to purchase clothes, many of the items were never worn, many others were intended for the use of other people, and in the end the wardrobe items were all returned. It certainly wasn't true that I or my family had been on any kind of 'big-time shopping trips.' "

All true, Kline said this week. Her reticence so far, she said, was out of respect to a client. But now that Palin herself is discussing her unidentified "New York stylist," Kline would like to clarify a few details, which she did first in an interview for the campaign biography "Sarah From Alaska" by Scott Conroy and Shushannah Walshe, published this month.

Kline is not, as some news reports suggested, the same Lisa Kline who owns a boutique in Los Angeles. She is not, as Palin's book suggests, Katie Couric's stylist; she has never met Couric. Most important, the six-figure tab for the Palin family's clothing during the convention was not as outrageous as it seems, Kline insists, considering the scope of the job.

As for her fee of $54,900, reported in campaign filings, it also covered an assistant and some expenses. She said the high fee was justified because styling the Palins was a last-minute holiday weekend assignment that had Kline sleeping no more than a few hours at a time. "It's very hard to put a figure on a 24-hour day," she said.

Kline, a self-employed fashion consultant, specializes in dressing well-heeled corporate executives and television news personalities, including local and network anchors, she said, although she declined to name her news media clients.

Not surprisingly, given her clientele, she eschews Rachel Zoe-esque bling for tailored jackets and simple underpinnings that convey authority, polish and professionalism.

One client, Linda Sawyer, chief executive for North America of the advertising agency Deutsch Inc., said, "She doesn't impose her style on you, and she just has a great eye."

Kline declined to detail how she came to be Palin's stylist. It has been widely reported, including in "Going Rogue," that the plum assignment resulted from a relationship with Nicolle Wallace, a former "CBS Evening News" political analyst who became a senior aide to the McCain campaign.

In the days after McCain's defeat, unnamed aides told reporters that they were furious over the wardrobe expenses. Wallace, they said, had simply told Palin to buy three suits for the Republican convention in St. Paul and to hire a stylist, with anticipated costs under $25,000.

But as Kline tells it, her assignment expanded and expenses quickly spiraled, with no one questioning the total or how it might look if the shopping sprees for Jimmy Choo, Kate Spade and Prada came to light.

On the afternoon of Aug. 29, 2008, Kline fielded a surprise phone call: Was she available to dress Sarah Palin for the Republican National Convention, which was to begin three days later on Labor Day?

"It took a moment to register," she said. "Then of course I said yes."

In other circumstances, Kline said, she could have bought Palin's wardrobe for far below retail through her relationships with designers. But it was the Friday of a holiday weekend and "there wasn't a person around," she said. "The only avenue was retail, straight retail."

She set to work in New York, buying elegant pieces at Saks Fifth Avenue and Barneys. When she left for the convention Labor Day morning, she had "a pretty decent amount of clothing to choose from," she said.

Arriving in Minneapolis with a seamstress and an assistant she'd enlisted, Kline planned a "run through" of outfits with Palin for an appearance she would make greeting McCain, as he arrived by plane Wednesday afternoon.

But late on Tuesday, Kline said she was asked to provide clothes for the entire Palin family, including the candidate's husband, Todd; their sons Track and Trig, the infant; and daughters Bristol, who was pregnant, Willow and Piper. Levi Johnston, Bristol's then-boyfriend, was also included.

"The campaign advisers realized the kids, everybody, needed to be dressed," Kline said. "This was a family that was about to stand before the world, and they just came with their everyday-life clothes."

With less than 24 hours before the Palins' national debut on the tarmac, it was decided that the luxury retailer Neiman Marcus, which has a store in Minneapolis, offered the best available selection for the circumstances. Arrangements were made for a private early-morning trip.

Neiman Marcus opened for Kline and her assistant at 7 a.m. on Wednesday, she said, and the two split up and spent a rushed 90 minutes or so gathering what they needed. Palin and her family were not there; nor was anyone from the campaign. Instead, the two stylists relied on a couple of salesclerks and a store manager.

"There was no conversation. There was no chitchat. It was just, 'We need two pairs of pants in size yadada,' " Kline said. The purchases were rung up, but Kline was not asked for payment of any kind.

"Apparently it had been prearranged," she said. (According to election filings, more than $130,000 of clothing charges from New York and Minneapolis was picked up by a Republican consultant, Jeff Larson, who was reimbursed by the Republican National Committee.)

Kline said she does not recall who asked her to expand her styling to the entire Palin family or who set up the appointment at Neiman Marcus, which later became so controversial because it undermined the candidate's image as a populist.

Nor does Chris Edwards, the Palin campaign's deputy chief of staff, who said this week that he does not recall meeting directly with Kline. "I don't know where the breakdown of communication occurred," he said. "I know that Nicolle did not approve $150,000 worth of clothes."

Back at the Hilton Minneapolis, Kline and her assistant set up their purchases on racks in Palin's suite. One by one, they did a run-through with each family member. "Oh, God, it was just staying focused," she recalled. "Get each person their outfit, get the clothing tailored right there in the room. The clothes literally went from the sewing machine onto their bodies. It was, 'OK, this is good, let's go, next!' "

She described the candidate as a size 4 or 6 and very attractive, with beautiful skin, if a bit dowdy before the transformation. "She was very, very sweet," Kline said. "I felt comfortable right away with her. She definitely had an opinion about the clothes, but it was a gentle opinion. If she didn't like something, it was, 'Oh, I don't think so.' "

Kline says she never saw or communicated with Palin after the convention, although she prepared a "look book" for her for the campaign trail, with photos showing how to put together outfits. Kline avidly followed Palin's appearances on television, but as soon as the politically damaging news of the designer wardrobe broke on Oct. 21, Palin stopped appearing in the clothes, Kline said.

Promoted
Listen to the latest songs, only on JioSaavn.com
Kline recalled sitting with Palin in the convention hall green room, chatting casually, just before Palin's star-making acceptance speech. A few minutes later, Kline went out to the convention floor. She admired Palin in the black pencil skirt and $2,500 Valentino jacket from Saks that Kline had selected. She had thought the jacket was a little too grand and had removed its gold buttons and a big swoop of fabric in front, and she had shortened the sleeves to three-quarter length.

"I felt I had achieved my goal," Kline said. "I thought she looked great. I really did. It was perfect for the occasion."