The Indian mystery and history in Liz Taylor's jewels 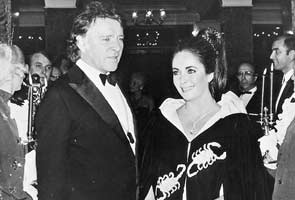 Richard Burton and Elizabeth Taylor arrive at
Hotel Hermitage for the Scorpion Ball
in Monaco, in this Nov. 15, 1969 file photo.

A part of Indian history is being auctioned off on December 13th in New York City when the late Elizabeth Taylor's legendary jewelry will be up for bidding at Christie's: the Taj Mahal diamond from 1627. Taylor received the stone, which is set as pendant, as a gift on her 40th birthday in 1972 from Richard Burton, whom she was married to at the time. Burton bought it from Cartier for 350,000 pounds, and Taylor had the jeweler replace its original silk chord with an adjustable diamond and ruby chain.

Though the gem is associated with one of the most famous marriages of this century- the one of Burton and Taylor, its provenance goes back to one of the greatest love stories in history. The Mughal Emperor Jahangir gave it to his son Shah Jahan, who in turn gifted it to his favorite wife Mumtaz Mahal and later built the Taj Mahal in her honor.

The heart-shaped table-cut diamond is nestled within a red stone and has a jade mount with smaller table-cut diamonds. According to the Christie's sale catalog, it has three Persian inscriptions: Noor Jahan Baygum-e-Padshah, who was Jahangir 's wife ("Baygum-e-Padshah means she was a queen of the emperor), the number 23 which is how many years he had ruled at the time, and the Islamic date 1037 which is between 1627 and 1628. The enamel latticework motif on the back of the piece was added at a later date, and it's unclear if Noor Jahan ever wore the diamond or when exactly Jahangir gave it to his son.

Burzine Waghmar, who edited the book The Empire of the Great Mughals and is an archivist at the School of Oriental and African Studies, which is part of the University of London, said that the stone itself probably came from the Golcanda mines in the south which was the major diamond mine in India at the time. Jahangir may have purchased it from a jeweler who came to court or it might have been a gift from a Deccan king, he says. "Such lavish gifts exchanged at court between Muslim rulers was not uncommon at the time," he said.

Taylor may have made the piece famous, but much of its journey to her remains a mystery. Rahul Kadkia, the 37 year-old Mumbai born Christie's head of jewelry for the Americas who will also auction off the piece, says that Cartier probably acquired the diamond through its royal Indian connections. "Many of these noble families were buying and selling [jewelry] regularly in the late 1920s and 1930s," he said. (Cartier was unable to provide any further information of the stone)

Though it's not clear what happened to the diamond after Mumtaz Mahal owned it, Waghmar surmises that it may have shuffled hands between Indian royalty, diplomats and notable British families.

The estimated price for the Taj Mahal gem is between $300,000 and $500,000, and it stands out for not only for being a part of Taylor's jewelry collection but also as a rare remaining jewel from the Mughal time period.  Jewelry from India seldom comes up for auction, according to Kadakia. "In the 8,000 to 10,000 lots of jewelry we sell a year, we might see five Indian ones," he said. The pieces from the Mughal era such as the Taj Mahal diamond are the most desirable in the international jewelry market, he says, but difficult to find since many of them were torn apart for their stones.