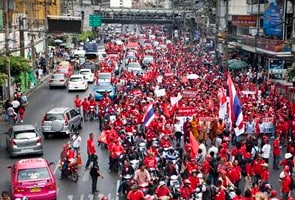 Bangok: Twenty-thousand Red Shirt protesters descended on the streets of Thailand's capital on Sunday, taking over the Bangkok Democracy Monument as they held a peaceful but noisy rally.

Marching from the central business district of Ratchaprasong, the anti-government demonstrators arrived at the monument in the afternoon local time and were planning to stay on until midnight (1700 GMT).

Sunday's gathering was called to mourn those killed during last year's violence and to demand the release of Red Shirt leaders who were detained on "terrorism" charges.

"Because we don't know and don't have an answer as to when the leaders will be granted bail, people outside must show their power through peaceful means to show that those who are behind bars do have friends," Jatuporn Prompan, a Red Shirt leader and a member of parliament said on Sunday after addressing the crowd.

The Democracy Monument was one of two locations where clashes between the protesters and the Thai military took place during the nine-week protests last year.

About 90 people were killed and more than 1400 were wounded in the March-May unrest, as the protesters tried to force Prime Minister Abhisit Vejjajiva to call early elections.
Sunday's demonstration marked the group's second big gathering after the Thai government lifted a state of emergency in Bangkok on December 22.

The law technically barred gatherings of more than five people but was widely ignored by the Red Shirt movement.

The group continues to be active and is treated as a major threat by the government.

Hundreds of police turned out to provide security for the demonstration.

The protesters were later set to march to Bangkok's Democracy Monument.

The Red Shirts leaders earlier announced they would not stage a long-term protest and will instead demonstrate on the streets of Bangkok twice a month.
Comments
red shirts bangkokred shirt protestersbangkok protestsbangkok violencethailand protests 2010red shirt protesters rally