President Barack Obama tears up as he speaks about the Newtown shooting victims during a statement in the East Room of the White House in Washington, on January 5, 2016. (Doug Mills/The New York Times)

Washington: Tears streaming down his face, President Barack Obama on Tuesday condemned the gun violence that has reached across the United States as he vowed to take action to curb the bloodshed with or without Congress.

"In this room right here, there are a lot of stories. There's a lot of heartache," Obama said in the White House East Room, flanked by relatives of those struck down in mass shootings, including former Rep. Gabrielle Giffords of Arizona. "There's a lot of resilience, there's a lot of strength, but there's also a lot of pain."

For all the emotion he showed, Obama nonetheless faces legal, political and logistical hurdles that are likely to blunt the effect of the plan he laid out.

A number of the executive actions he plans are only suggested "guidance" for federal agencies, not binding regulations. They were framed mostly as clarifying and enforcing existing law, not expanding it. And many of those measures rely on hefty funding increases that a Republican-led Congress is almost certain to reject.

Among other measures, the plan aims to better define who should be licensed as a gun dealer and thus be required to conduct background checks on customers to weed out prohibited buyers.

Even the administration said it was impossible to gauge how big an effect the steps might have, how many new gun sales might be regulated or how many illegal guns might be taken off the streets.

"I don't think anyone can credibly tell you yet what all this means," Charles E. James Jr., a former federal gun crimes prosecutor who now represents gun industry clients, said of Obama's plan.

Attorney General Loretta E. Lynch told reporters Monday that she could not say whether the new restrictions would have had any effect in a series of recent mass shootings, including last month's attack in San Bernardino, California, that left 14 dead. But in the massacre of nine people at a South Carolina church in June, the man charged, Dylan Roof, was able to buy a .45-caliber handgun despite admitting to drug use. The FBI director, James B. Comey, said at the time that a breakdown in the background check system had allowed Roof to buy the gun. 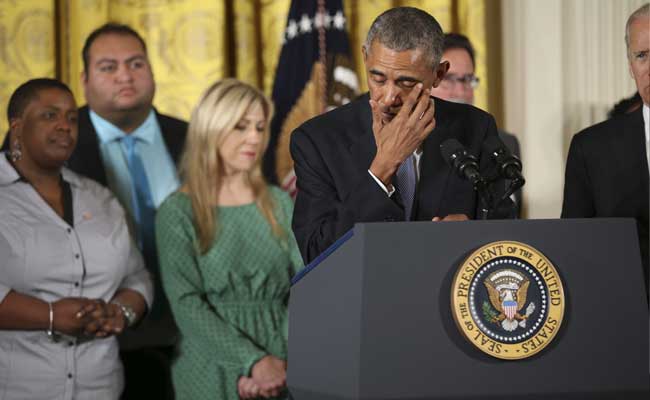 Tears streaming down his face, President Barack Obama on Tuesday condemned the gun violence that has reached across the United States as he vowed to take action to curb the bloodshed with or without Congress.

Obama voiced irritation over the issue.

Nearly 21 million gun sales were processed through the background check system in 2014, but some industry analysts say as many as 40 percent more firearms could have been sold through private transactions not subject to background checks. Even the most hopeful advocates say the new plan would affect only thousands of sales.

Proposals that would have the biggest effect have long been shelved by even the most ardent gun control advocates who now see an assault weapons ban or mandatory gun buyback programs like ones in Australia in 1996 and 2003 as political fantasy.

Modest as the new measures may prove to be, the response was unrestrained. Republican presidential candidates and congressional leaders greeted them with peals of protests and angry claims of a "gun grab" that would violate Second Amendment rights. Gun control advocates hailed them as a breakthrough in what has often been a losing battle to toughen firearms restrictions.

The families of gun victims and gun control activists crowded into the White House and watched Obama break down as he recalled the young children gunned down by an assailant in 2012 at Sandy Hook Elementary School in Connecticut.

"First-graders," the president said, his eyes drifting off and becoming red with tears. He wiped his face and paused to regain his composure: "Every time I think about those kids, it gets me mad."

By taking action, Obama is purposely stoking a furious political debate that has roiled Congress and spilled over into the presidential campaign. Vowing last year to "politicize" the gun issue after a mass shooting at an Oregon community college, Obama on Tuesday made good on that promise.

The National Rifle Association, targeted by Obama in his speech, mocked his tears.

Republican presidential candidates also raced to condemn Obama, with Sen. Ted Cruz of Texas putting up a Web page with a menacing, altered picture of the president in a commando outfit. A caption read "Obama Wants Your Guns" next to a fundraising appeal.

Speaker Paul D. Ryan of Wisconsin posted his opposition on Twitter as the president spoke, saying Obama's "words and actions amount to a form of intimidation that undermines liberty."

But Obama's allies were equally intense in their defense.

Dan Gross, the president of the Brady Campaign to Prevent Gun Violence, posted on Twitter from the East Room: "President wiping tears. So am I. One of the most moving things I've ever seen."

Hillary Clinton, the Democratic presidential candidate, posted a "thank you" to Obama for "taking a crucial step forward on gun violence."

Obama's plan is likely to face legal challenges from gun rights groups that accuse him of overstepping his executive authority. A number of critics said they suspected that the president's push to "clarify" the definition of licensed gun dealers could force even the occasional gun seller to register their transactions.

Shortly before Obama's remarks, the Bureau of Alcohol, Tobacco, Firearms and Explosives released guidance to gun sellers on the criteria that could qualify someone as a gun "dealer" who needs to be licensed and conduct background checks. Those criteria include having a website, using business cards, or selling new guns in their original packages.

The 14-page pamphlet, posted on the agency's website, offers examples to help guide sellers, such as "Bob," who wants to sell a gun collection that he inherited (he would not need to be licensed), and "Sharon," who sells guns at flea markets every weekend (she would need to be licensed).

But the administration rejected more aggressive options, such as establishing a defined threshold for the number of gun sales that would qualify someone as a dealer required to conduct background checks.

White House officials were mindful of the legal reversals sustained when the president tried to grant legal immigration status by executive action to 5 million immigrants in the country illegally, and they said they tried to make the gun plan as safe from legal attacks as possible.

"This is really pretty modest stuff," said Ladd Everitt, the communications director for the Coalition to Stop Gun Violence, an advocacy group.

Chuck Wexler, the executive director of the Police Executive Research Forum in Washington, who attended Obama's speech, said many police organizations had been pushing for more background checks on firearm purchases. While he praised Obama for taking action, he said more needed to be done.

"If Congress doesn't allow for legislation, I think he went as far as he could using the bully pulpit," Wexler said.