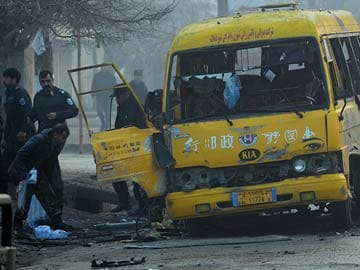 Afghan investigators inspect a damaged bus at the site of a suicide attack in Kabul on January 26, 2014.

Kabul: An Afghan official says a suicide bomber has attacked a military bus in Kabul, killing at least four people.

Gen. Mohammad Zahir Azimi, spokesman for the Defense Ministry, said the bomber waited on foot Sunday in the east of the city for the bus to arrive before setting off his explosives. He said the dead included two soldiers and two civilians, one of whom was a woman. He says 22 others were wounded.

Promoted
Listen to the latest songs, only on JioSaavn.com
Taliban spokesman Zabihullah Mujahid claimed responsibility for the attack in an email sent to media.