Measurements on 20 Swiss glaciers have shown that melt rates this year have reached "record levels", according to the annual study. 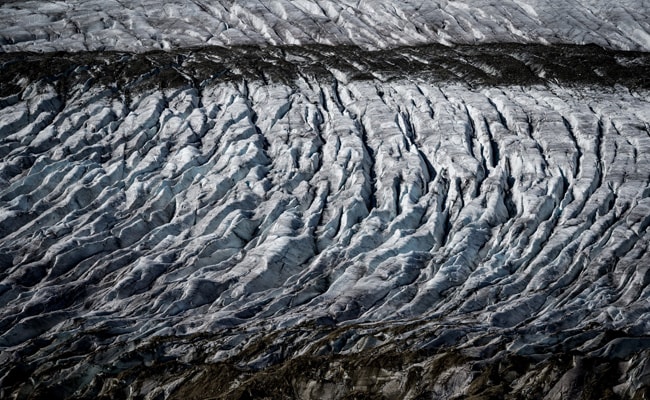 Switzerland's glaciers have lost a tenth of their volume in the past five years alone -- a melting rate unmatched during observations stretching back more than a century, a study showed Tuesday.

Measurements on 20 Swiss glaciers have shown that melt rates this year have reached "record levels", according to the annual study on the state of the glaciers, published by the Cryospheric Commission at the Swiss Academy of Sciences.

The study, released amid growing global alarm over climate change, found that intense heatwaves over the summer in Switzerland had dashed hopes that an exceptionally snow-filled winter would limit the glacier melt this year.

The commission said that in April and May, snow cover on the glaciers was between 20 and 40 percent higher than usual, with depths of up to six metres measured in some places as late as June.

But during two weeks of intense heat at the end of June and again in late July, "the volume of snow and ice melting on Swiss glaciers ... was equivalent to the country's total annual consumption of drinking water," it said in a statement.

The result, it said, was that the thick snow layer quickly disappeared and the strong melt continued until early September.

"This means that, over the past 12 months, around two percent of Switzerland's total glacier volume has been lost," the commission said, adding that the rate of loss over the past five years "exceeds 10 percent."

That marks "a rate of decline never previously observed in the time series extending back for more than a century," it said.

Tuesday's study comes less than a month after a "funeral march" was undertaken up a steep mountainside to mark the disappearance of the Pizol glacier -- one of more than 500 glaciers to vanish from the Swiss Alps since the turn of the 20th century.

A recent study by glaciologists at the ETH technical university in Zurich indicated that more than 90 percent of the some 4,000 glaciers dotted throughout the Alps could disappear by the end of this century if greenhouse gas emissions are not reined in.

(Except for the headline, this story has not been edited by NDTV staff and is published from a syndicated feed.)
Comments
SwitzerlandSwiss glacierGlacier melt rate