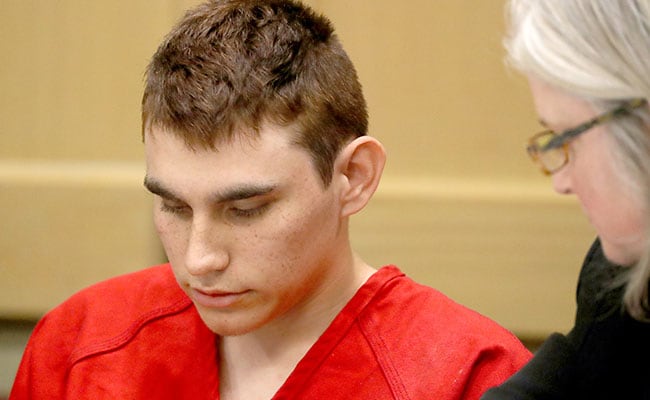 Nikolas Cruz is being charged with 17 counts of premeditated murder

Fort Lauderdale, United States: A Florida judge entered a not-guilty plea for Nikolas Cruz, who faces a possible death penalty for a massacre at a high school last month that killed 17 people and triggered a nationwide walkout of students on Wednesday.

Cruz, 19, chose to remain silent during a hearing in Broward County circuit court in Fort Lauderdale. Judge Elizabeth Scherer then entered the not-guilty plea on his behalf for 17 counts each of first-degree murder and attempted murder for the Feb. 14 shooting spree in Parkland.

Cruz, wearing an orange jail jumpsuit and shackled at wrists and ankles, sat alone and kept his head bowed in what is normally the jury box while guarded by a dozen deputies.

Nine relatives of victims of the attack at Marjorie Stoneman Douglas High School attended the hearing. "Son of a bitch," one said as Cruz was led from the courtroom.

Scherer also instructed Cruz to fill out an application to determine if he can pay for his lawyers. After a presentation on Cruz's finances by his lawyers, she said he had roughly $37,000 and scheduled an April 11 hearing to determine whether he was indigent.

Scherer also set April 27 for a hearing for attorneys to agree to a trial date.

Cruz's court appearance coincided with students spilling out of classrooms by the thousands waving signs and chanting slogans in a coast-to-coast protest against gun violence prompted by the Florida rampage.

One of the protests took place in Fort Lauderdale near the courthouse, in front of the county's public school offices. About 275 students from a half dozen Broward County high schools, some of whom walked more than 15 miles (24 km), demanded an end to gun violence.

Promoted
Listen to the latest songs, only on JioSaavn.com
About 40 of the students staged a "die in," laying down on the sidewalk to protest gun violence in schools. Others chanted, "End gun violence. No more silence."
© Thomson Reuters 2018