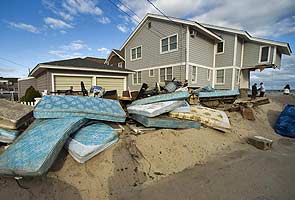 Ruined mattresses sit in a pile outside a beachfront home as residents continue to clean up after Superstorm Sandy in Point Pleasant Beach, New Jersey.

New York: A housing crisis loomed in New York City as victims of superstorm Sandy struggled without heat in near-freezing temperatures on Sunday and nearly one million people in neighboring New Jersey shivered in the dark without power.

Fuel shortages and power outages lingered nearly a week after one of the worst storms in US history flooded homes in coastal neighborhoods. Mayor Michael Bloomberg said 30,000 to 40,000 people in New York City alone would need shelter.

"We don't have a lot of empty housing in this city. It's a problem to find housing. We're not going to let anybody go sleeping in the street," Bloomberg said. "But it's a challenge and we're working on this as fast as we can."

Temperatures were forecast to fall close to freezing overnight and an early-season "Nor'easter" storm was expected to hit the battered region this week with strong winds and heavy rain.

"The power is back, but we have no heat," said Adeline Camacho, a volunteer who was giving soup and sandwiches to needy residents of the Lower East Side of Manhattan on Sunday. "A lot of people haven't been able to bathe or stay warm. Last night was cold and this night is going to be much worse."

Overnight, at least two more bodies were found in New Jersey - one dead of hypothermia - as the overall North American death toll from Sandy climbed to at least 113.

"People are in homes that are uninhabitable," New York Governor Andrew Cuomo said at a news conference.

Concerns are also growing that voters displaced by Sandy won't get to polling stations on Election Day on Tuesday. Scores of voting centers were rendered useless by the record surge of seawater in New York and New Jersey.

Sandy killed 69 people in the Caribbean before turning north and hammering the US Eastern Seaboard on Monday with 80 mile-per-hour (130-kph) winds.

The two new deaths in New Jersey - where the storm came ashore last Monday night - included a 71-year-old man who suffered from hypothermia and a 55-year-old man who died from smoke inhalation in a house fire, police said on Sunday.

That raised New Jersey's death toll to 24 while the New York City death count was 40.

In the hard-hit borough of Staten Island, Marie Mandia's house had a yellow sticker on it, meaning the city restricted its use. The storm surge broke through her windows and flooded her basement and main floor, the retired teacher said.

"I'm not staying here. There's no protection," said Mandia, 60, who stood outside by a pile of her ruined things - a washer, drier, television and furniture. "Here's my life. Everybody's looking at it."

Similar scenes of destruction were to be seen in the Rockaways, a strip of land along the Atlantic in Queens. Street after street, people were digging out from under several feet of sand and cleaning up from the deluge of water that ripped apart fences, turned over cars and left homes flooded.

Volunteers made their way there to help, even as life appeared to be back to normal in Times Square, where the neon lights were bright and Broadway theaters were up and running.

"It's like the city, the officials, have forgotten us. Only our neighbors and strangers, volunteers, have been here," Gregory Piechocki said. "We don't need food or water. We need a warm place to sleep and some sign that we aren't forgotten."

The Federal Emergency Management Agency said 182,000 individuals in Connecticut, New York and New Jersey had registered for assistance by Sunday afternoon, and more than $158 million had been approved.

Sunday was to have been marathon day in New York, an occasion that normally draws more than 40,000 runners from around the world. But Bloomberg abruptly called off the race on Friday, bowing to criticism that it would divert resources from flood-ravaged neighborhoods.

Without a race, hundreds of runners set off on informal runs to deliver food and clothes to people in need. More than 1,000 people crowded onto two Staten Island Ferry boats early on Sunday, headed to the stricken borough with relief supplies.

Ruth Silverberg, 59, recently took a cruise in the Bahamas. She returned to her Staten Island home Sunday for the first time since the storm and found more than 4 feet (1.2 meters) of water in her basement. "Things were just floating. I thought it would take me two weeks to clear it out," she said.

Instead, a group of 15 marathon runners formed an assembly line and cleared the basement of its contents in two hours. "I'm awed," Silverberg said, her voice breaking.

Fuel supplies continued to rumble toward disaster zones and electricity was slowly returning to darkened neighborhoods where many families have been without power for six days.

In New Jersey, where residents were waiting for hours in line at gas stations, Christie tried to ease the fuel crunch by reassuring people that refineries and pipelines were back online and gas was being delivered. "We do not have a fuel shortage," he said at a news conference.

The New York Harbor energy network was returning to normal on Sunday with mainline power restored, but there were growing concerns about heating oil supplies with cold weather forecast.

Power restorations over the weekend relit the skyline in Lower Manhattan for the first time in nearly a week and allowed 80 percent of the New York City subway service to resume. But Bloomberg said it would be a "very, very long time" before power would return to certain New York neighborhoods along the coast.

Most schools were due to reopen on Monday, though some were still being used as shelters. Walt Whitman High School in Huntington Station, Long Island, was housing about 100 people and expecting more to arrive as temperatures fall.

Some 1.9 million homes and business still lacked power across the Northeast on Sunday, down from 2.5 million the day before.

"All these numbers are nice, but they mean nothing until the power is on in your house," Cuomo said.

One of those still without power was 70-year-old Ramon Rodriguez, who lives in the Brooklyn seafront neighborhood of Red Hook. "I feel like I've spent my whole Social Security check on batteries and candles," Rodriguez said as he waited in line at the 99 Cent Dreams store. His search for ice to keep his freezer cold came up short. But, he added, "at least it's cold enough to leave food outside the windowsill."

At the building where he lives, garbage bags were piled high and the intercom that is typically used for security was not working, so the front door was unlocked.

With the post-storm chaos overshadowing the final days of campaigning, an NBC/Wall Street Journal poll found that 68 percent of those surveyed approved of how Obama handled Sandy, while 15 percent disapproved.

New Jersey has said it will allow people displaced by the storm to vote by email. In New York City, some 143,000 voters will be reassigned to different polling sites.

Bloomberg said the Board of Elections has "real problems," and warned that it would be critical to make sure poll workers were informed of the changes.

"Unfortunately, there is a history of not communicating changes to their poll workers," Bloomberg said, adding the board has proven to be "dysfunctional" in recent years.
© Thomson Reuters 2012
Comments
Sandy