"No To Military Rule": How An Anti-Coup Protest In Sudan Gained Momentum 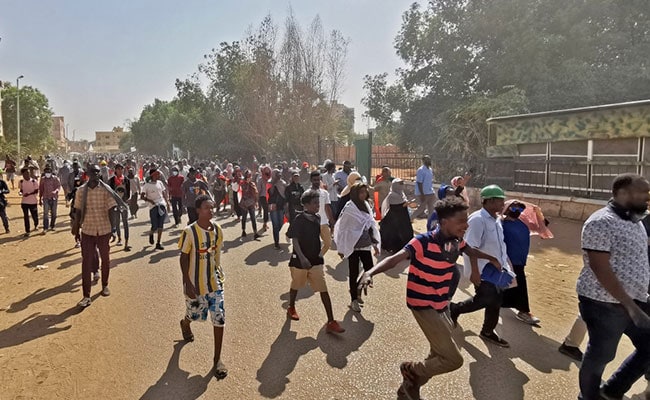 A police general was killed Thursday in Sudan's latest pro-democracy protest against an October coup.

Here are key developments since the military takeover.

On October 25, soldiers arrest civilian members of the transitional government, including Prime Minister Abdalla Hamdok, for refusing to back their takeover.

Led by General Abdel Fattah al-Burhan, they declare a state of emergency.

The coup sparks an immediate international backlash, with calls to free Hamdok. The United States says it is pausing $700 million in aid.

Protesters remain on the streets overnight and into October 26, manning barricades and chanting, "No to military rule".

Shops are shuttered after calls for a campaign of civil disobedience.

Hamdok is put under house arrest.

The African Union suspends Sudan, and the World Bank freezes vital aid to the poverty-stricken country, already hit by an economic crisis.

On October 28, more tear gas is fired along with rubber-coated bullets to disperse furious protests.

The UN Security Council calls on the new military rulers to restore the civilian-led government.

A week later Burhan -- the de facto strongman since the 2019 ouster of autocrat Omar al-Bashir -- forms a new ruling council.

He maintains his position as chief, while military figures and ex-rebel leaders keep their posts. The main bloc demanding a transfer to civilian rule is excluded.

Blood on the streets

At least five people are killed on November 13 by security forces seeking to stem anti-coup protests.

Four days later, 15 protesters are shot dead by security forces in what becomes the deadliest day since the coup.

On November 21, Burhan and Hamdok sign a 14-point deal to restore the transition to civilian rule, with elections in 2023.

Hamdok is reinstated as premier, and the deal says all political detainees will be freed.

But many reject the pact and take to the streets in renewed nationwide protests as a crackdown continues.

Several civilian leaders detained since the coup are released.

On December 19 -- the third anniversary of demonstrations leading to Bashir's ouster -- two men are shot dead and the UN says it received claims that 13 women and girls were raped during a security crackdown against anti-coup ralies.

More anti-coup protests erupt on December 30, despite the cutting of communication links and a tight lockdown in the capital.

The US and EU warn the generals not to name their own prime minister, and thousands again take to the streets with three protesters killed on January 6.

The UN on Monday says it will launch talks to help end the crisis, but there is a mixed response and two more protesters die ahead of the announcement.

Police say protesters stab to death one of their generals on Thursday as anti-coup protesters try to march on the presidential palace, the first security force fatality since the coup.

A protester is also shot dead by security forces, bringing to 64 the number of other people killed since the coup, according to pro-democracy medics. Hundreds have been wounded.