Since the owner couldn't afford to take the dog to the vet, the person pretended to "find" the abused dog on the side of the road and make up a horrible story. 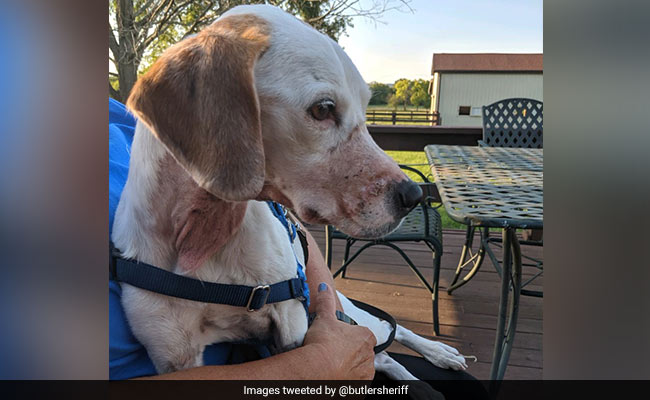 The marks around the dog's snout came from the owner making the dog wear a muzzle several hours.

The images rippled across the country: a forlorn pup, her muzzle and throat all pink like she had broken out in a rash.

Her name was Dani, the sheriff in Butler County, Ohio, said last week. A concerned citizen had found her abandoned on the side of the road on Aug. 17, he said. Dani's muzzle was duct-taped shut and her throat slit open. The Good Samaritan rushed the dog to the veterinarian to save her, winning the hearts of animal lovers nationwide. The veterinarian discovered a chip on Dani saying she came from HART Rescue in Cincinnati - and soon inquiries were pouring into the sheriff's office about how to help the dog.

"How do I donate to the care and recovery of this poor sweet baby?" one person posted on Facebook.

"I would love to give this pup a loving home. Can I apply?" another asked.

Butler County Sheriff Richard K. Jones was touched, praising the community for coming together during the tragedy and directing donations to HART. But as Dani recovered, Jones asked for the public's help: He needed to find the person who did this.

"Words cannot describe the disgust I'm feeling right now," Jones wrote. "We will work diligently to find who did this and seek justice."

By Monday, the search was over.

Jones didn't have to look far to find Dani's owner: It was the same person who "found" her on the side of the road - and who made up the entire story just to get free vet care, Jones said Monday .

Jones said that detectives learned from the owner, who hasn't been named by police, that Dani had actually cut on her neck after running into a barbed-wire fence. Since the owner couldn't afford to take the dog to the vet, the person pretended to "find" the abused dog on the side of the road and make up a horrible story. The red marks around Dani's snout came not from duct tape but from the owner making the dog wear a muzzle several hours a day because Dani was "chewing up items in their residence and being aggressive towards their other canine."

Jones said the dog was brought to the vet again, and the vet found that the neck injury was not intentional.

He did not say whether the office was pursuing criminal charges, but officials at HART Cincinnati, where the dog was adopted in 2011, said they hoped he would.

"Tears have been shed. We've been angry. We've been upset. We felt like puking. . . . It's just a whole range of emotions," HART rescuer Katie Goodpaster told Fox19. "We are absolutely pushing for charges."

The case is the latest feel-good story to go viral only to end up being a hoax. Fake Good Samaritans in recent months and years have included everyone from fake homeless people to a fake firefighter's wife. Perhaps most notably, a woman's story about a homeless veteran who helped her on the side of the highway after she ran out of gas, which led people to donate more than $400,000 to the GoFundMe she started for him, turned out to be made-up as a way to make money.

And like most hoaxes, Jones's call for help to the public went viral, turning into an international pursuit. The New York Daily News said, "Cops hunt sicko who taped dog's mouth shut and slit her throat." Yahoo! News Australia said, "Search for owners after tortured dog found with horrific injuries." An animal lover even started a petition, urging the Butler County prosecuting attorney to punish the animal abuser with the full force of the law.

It's unclear what will happen to the owner or to Dani, but HART Cincinnati said that it paid for the dog's surgery and recovery.