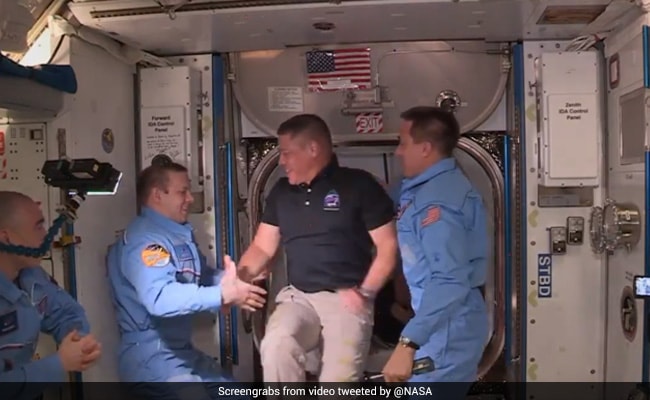 NASA astronauts entered the International Space Station on Sunday after a landmark 19-hour journey on the first crewed US spacecraft in nearly a decade, a triumph for SpaceX and private enterprise.

They were greeted by fellow US astronaut Chris Cassidy, as well as cosmonauts Anatoli Ivanishin and Ivan Vagner, all in the blue jumpsuits of the space station, which was launched in 1998 and first inhabited in 2000.

This is the first time in human history @NASA_Astronauts have entered the @Space_Station from a commercially-made spacecraft. @AstroBehnken and @Astro_Doug have finally arrived to the orbiting laboratory in @SpaceX's Dragon Endeavour spacecraft. pic.twitter.com/3t9Ogtpik4

NASA administrator Jim Bridenstine spoke to the crew from mission control in Houston.

"Welcome to Bob and Doug," said Bridenstine. "I will tell you the whole world saw this mission, and we are so so proud of everything you have done for our country."

"It's great to get the United States back in the crewed launch business and we're just really glad to be on board this magnificent complex," replied Hurley, who commanded the Crew Dragon capsule called "Endeavor."

During their stay Behnken and Hurley will continue to perform more checks on Endeavor in order to sign-off on its readiness.

They will also provide support to the three other crew members on board the ISS.

Hurley added that he hoped the mission would inspire Americans at a time when the world is beset by the coronavirus pandemic.

"This was just one effort that we can show for the ages in this dark time that we've had over the past several months to kind of inspire, especially the young people in the United States, to reach for these lofty goals," he said.

Asked by a lawmaker how the Crew Dragon's handling compared to that of the Space Shuttle, which was shuttered in 2011, Behknen indicated the new ship was a rougher ride.

"Dragon was huffing and puffing all the way into orbit, and we were definitely driving or riding a dragon all the way up," he said.

"And so it was not quite the same ride, the smooth ride as the Space Shuttle was."