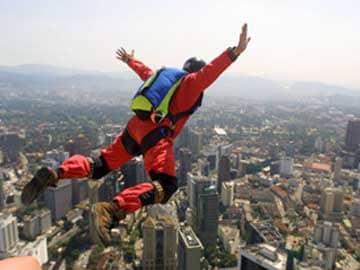 New York: A skydiver fell from 9,000 feet after getting tangled in his parachute while doing a difficult stunt but has miraculously survived with broken bones and a head injury.

Victor Bryie, 27 of Winter Haven, Florida, had been attempting a Canopy Relative Work manoeuvre with another parachutist, Shaun Phillips, also 27 of the UK when the accident took place.

The crew manoeuvre is essentially when skydivers stack their parachutes.

Phillips told investigators both he and Bryie jumped at 14,000 feet. At 9,000 feet, Phillips was above Bryie and said Bryie came up under him too fast with an open chute. The parachute's lines entangled both men, WFLA-TV reported.

As they were falling, Phillip's chute was still open but Bryie's was completely "cocooned" in his lines. Phillips managed to get himself free at about 3,000 feet, but Bryie was spinning horizontally while fully wrapped in lines and his parachute was only partially open.

"You can never be trained to fall through space with no parachute," Arch Deal, a veteran skydiver with more than 6,000 of them under his belt, said.

Polk County Sheriff's Office investigators said the accident happened yesterday afternoon. County officials found Bryie where he landed near a fence. Bryie was taken by helicopter to a hospital with broken bones and a head injury. He was in serious but stable condition last evening.