US President-elect Joe Biden tweeted his "deep condolences to the loved ones of the peacekeepers, including 6 American service members, who died on Tiran Island," referring to an earlier toll from the force. 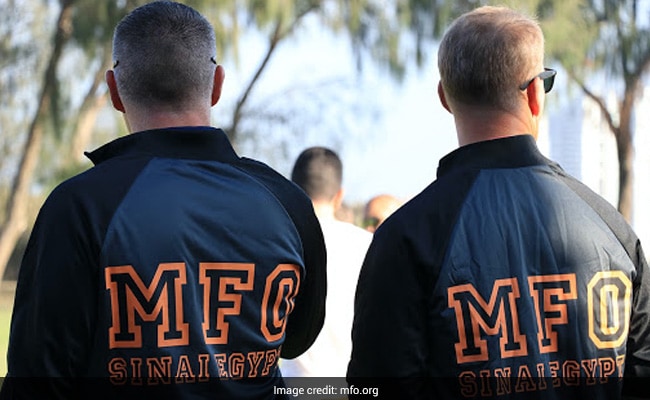 "We are deeply saddened by the loss on November 12, 2020, of seven of our uniformed military colleagues from three countries who died in a helicopter crash during a routine mission. This included one Czech, one French, and five US MFO members," the peacekeeping force said late Thursday.

Throughout the day conflicting numbers about the final death count were given by the MFO.

US President-elect Joe Biden tweeted his "deep condolences to the loved ones of the peacekeepers, including 6 American service members, who died on Tiran Island," referring to an earlier toll from the force.

Strategic Tiran island, along with Sanafir, in the Red Sea was officially ceded to Saudi Arabia in 2017 as part of a maritime agreement.

Biden also wished "a speedy recovery to the surviving American".

The sole survivor of the crash was medically evacuated, the MFO added.

The MFO was set up by Israel and Egypt to supervise parts of their 1979 historic peace treaty after the United Nations did not approve a peacekeeping force for the Sinai.

It was established as an alternative to a UN mission, but has consistently had significant international backing, notably from the United States.

The multi-national force said in its statement that it would launch an investigation into the incident.

"A full investigation of the cause of the crash, which appears to be mechanical in nature, has been launched," the peacekeeping force said.

Chris Miller, acting US Secretary of Defense, said in a statement he was "deeply saddened" by the loss of lives.

"Today we are tragically reminded of the last full measure our uniformed warriors may pay for their service," he added.

Israeli Foreign Minister Gabi Ashkenazi also sent his condolences to the victims' families in a tweet posted by a spokesperson, stressing that "security and stability in the region is extremely important".

Egypt's Sinai Peninsula is facing a hardened insurgency affiliated with the Islamic State group in the north of the restive region, while the south boasts touristic resort towns by the Red Sea, near where the crash happened.

Egyptian officials from the South Sinai governor's office would not provide further details to AFP on the exact crash site, nor would the MFO.

The country's military spokesperson also could not be reached.

More than 930 suspected militants have been killed in the region along with dozens of security personnel, according to official figures.

Egypt's foreign ministry expressed its condolences "as a government and people" in a late Thursday statement confirming the cause of the crash was a mechanical failure near Tiran island.

The Czech army said in a statement that "the cause of the crash was a technical defect", also identifying the Czech victim as sergeant Michaela Ticha, born in 1993.

"I am terribly sorry. You can never get ready for some things. Condolences to her family," tweeted Czech chief-of-staff, Ales Opata.

Jonathan Cohen, the US ambassador to Egypt, paid tribute to the victims as well.

"These six Americans, one Frenchman, and one Czech epitomized the noble spirit of preserving peace between our partners Israel and Egypt," he said on Twitter.

The MFO currently numbers more than 1,100 troops, including from Australia, the United States, Canada and France, and receives funding from Egypt, Israel and the US.

The force's website lists only one French member in its contingent, a liaison officer.