Ships Rescue Some 730 Migrants In Mediterranean 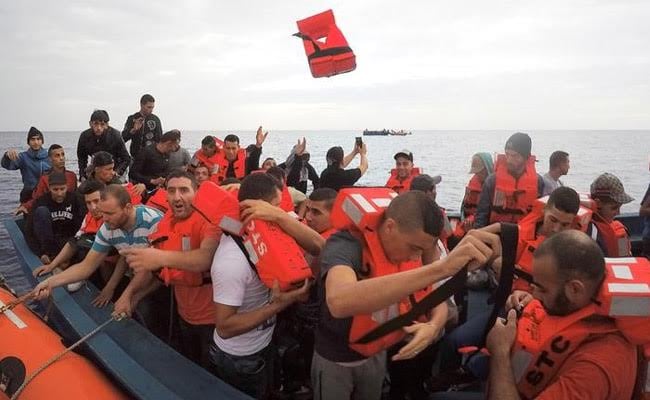 Madrid/ Milan: Humanitarian ships picked up about 730 migrants today from rubber and wooden boats in the Mediterranean, adding to a lengthening list of rescue operations in recent days.

Save the Children SAR team leader Gillian Moyes, onboard the rescue vessel Vos Hestia, said the past few days had been extremely busy, following a pattern seen in recent weeks.

"We are seeing increasing numbers of people, large scale rescues with multiple boats," she said.

She added there was insufficient capacity in search and rescues to deal with the situation unfolding in the Mediterranean.

On Saturday, hundreds of migrants, some drifting in rubber dinghies off the coast of Libya, were picked up by Spanish and Italian ships.

A Spanish navy ship was dispatched to help two migrant boats struggling to stay afloat near Libya on Saturday afternoon, and at sundown it found three other rubber dinghies transporting migrants in the area, Spain's Defence Ministry said in a statement today.

In total 526 people, including eight pregnant women and nine children, were picked up in that rescue, aided by a ship belonging to a non-governmental organisation, the ministry said. The migrants were headed to an Italian port, it added.

Around 800 migrants were rescued from rubber boats in six operations in the Mediterranean on Saturday, the Italian coastguard said.

Libya's coastguard had already intercepted 906 migrants on board damaged wooden and rubber boats on Friday, and earlier in the week humanitarian rescue ships picked up more than 1,000 migrants off Libya's shores.

Promoted
Listen to the latest songs, only on JioSaavn.com
The sea crossing between Libya and Italy has been attempted by an increasing number of migrants trying to reach Europe this year.

Arrivals of migrants to Italy are up almost 18 percent on the same period last year at more than 65,000, Italy's Interior Ministry said last week.
© Thomson Reuters 2017

Taliban Decree Says No One Can Force Women To Marry, Silent On Education