Searching out suitors for such a marriage of convenience proved difficult, so she created an online matchmaking forum to help others like her conform with family and societal pressures in China, where same-sex marriage is not legal and homosexuality remains taboo. 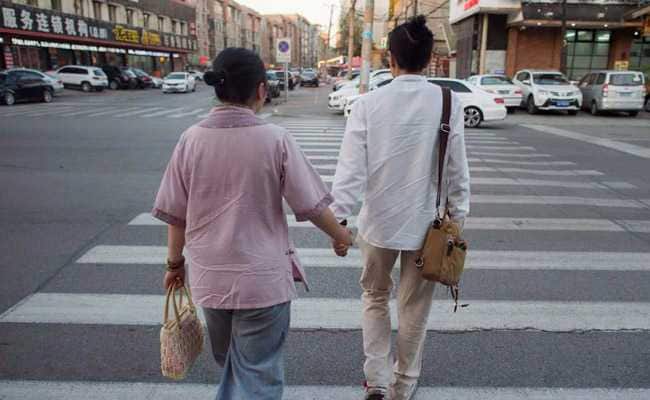 Xiaoxiong and her partner Xiaojing cross a Sheynyang road (AFP)

Shenyang, China: When Xiaoxiong and her lesbian lover wanted to hide their relationship from their parents, they decided to find men willing to marry them. They had a specific type in mind: Gay.

Searching out suitors for such a marriage of convenience proved difficult, so she created an online matchmaking forum to help others like her conform with family and societal pressures in China, where same-sex marriage is not legal and homosexuality remains taboo.

"I was so relieved that there was a way to please my parents without getting trapped in a marriage with some poor straight man," said Xiaoxiong, self-described tomboy, who did not want to give her surname to protect her privacy.

"Some of us wish we could trick ourselves, too," the 35-year-old added.

She lives with her partner, Xiaojing, 36, their dog and two cats in Shenyang, the capital of northeastern Liaoning province, one of China's more conservative regions.

But during holidays and special occasions, they separate to be with their husbands and families, pretending to be traditional wives.

In China being openly gay is still fraught with difficulties. Dressing a certain way or public displays of affection can draw stares and lead to family turmoil.

Some Chinese parents have even brought gay children to "conversion" clinics for treatment.

Homosexuality was classified as a mental illness in China until 2001 and a crime until 1997, and authorities have arrested gay rights activists.

Around 90 percent of 20 million gay men in China are married to women who are usually straight and do not initially know their husband's real sexual orientation, according to a 2012 study from Qingdao University. The study did not look at lesbians' behaviour.

But gay men and women are increasingly marrying each other in so-called "cooperative" marriages.

There are no estimates on the number of gay-lesbian marriages, but several websites dedicated to them have popped up in recent years.

The largest one, Chinagayles.com, says it has amassed more than 400,000 users and facilitated more than 50,000 cooperative marriages in the past 12 years.

"When I turned 25, my parents started to really pressure me to get married. So I searched the internet for ideas," Xiaoxiong said.

She started her own forum on the popular QQ social media platform to help gays like herself find the ideal fake spouse in northeast China.

Some of the men she spoke with had unrealistic expectations, such as wanting her to grow out her buzzcut or move to a different city to live in the same house as in-laws.

In 2012, she married a high school math teacher 10 years her senior whose laid-back demeanour immediately made her feel comfortable.

But she cringes at the wedding photos of herself in a white gown and curly black wig. The video makes her "want to vomit", she concedes.

Within weeks of the ceremony, Xiaojing, her partner for eight years, had also wed a gay man.

The two women run a traditional Chinese medical practise together, but they dedicate several hours each week to answer questions on the online matchmaking forum.

But Xiaojing warns people interested in cooperative marriages to be prepared for potential complications.

"Some people rush into a marriage with someone they barely know," she said. "But just like real marriage, it only works between people who agree on important things like where to live and whether to have children, and who genuinely care about each other."

But some gay rights activists frown upon such arrangements.

"By pretending to be straight and enjoying the social benefits, they are abandoning other LGBT people to face the pressure alone," said Ah Qiang, a prominent activist who leads China's PFLAG (Parents, Families and Friends of Lesbians and Gays) group.

"I think a reason homophobia is still so strong in China is that many straight people don't know any openly gay people," he told AFP.

Xiaoxiong and Xiaojing believe their families likely know the truth about their relationship, but nobody wants to acknowledge the obvious.

Promoted
Listen to the latest songs, only on JioSaavn.com
"We don't wish for much," said Xiaoxiong. "When we are home, when we are sitting side by side, we just feel so peaceful and happy."