The earthen wall of a privately owned irrigation dam in Solai in Kenya's Rift Valley, breached and inundated nearby settlements. 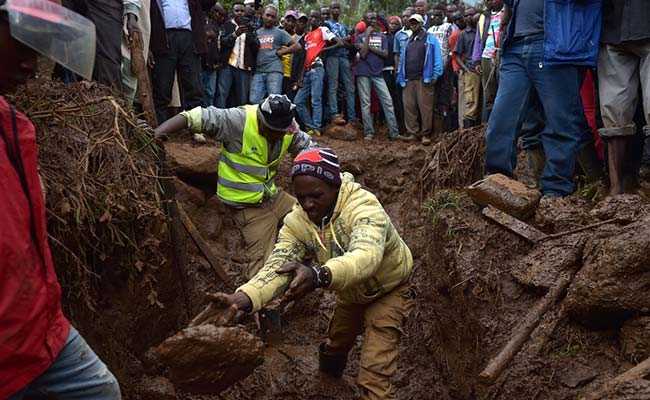 Villagers dig through mud as they attempt to find survivors of flash flooding at Solai. (AFP)

Nakuru, Kenya: The search for survivors after a dam burst its banks in central Kenya resumed Friday with 44 confirmed dead and a further 40 still missing, the region's governor said.

Weeks of heavy rains have caused flooding and mudslides across the country that have left 175 dead.

On Wednesday evening, the earthen wall of a privately owned irrigation dam in Solai, about 40 kilometres (25 miles) north of Nakuru town in Kenya's Rift Valley, breached and inundated nearby settlements.

Nakuru county governor Lee Kinyanjui said 44 bodies had been recovered so far, with another 40 reported missing, and warned that at least one other local dam "will have to be discharged to avoid disaster".

Dozens more were taken to hospital with injuries.

The search and rescue operation, involving emergency services as well as volunteers digging through the mud by hand, was disrupted by further heavy rainfall on Thursday, resuming on Friday morning.

A sea of mud and water washed away two villages and cut power lines, according to local residents. The torrent hit while people were in their homes, or sleeping, with one survivor describing it as "hell on earth".

Many of the houses affected were rickety structures made of wood and tin that stood little chance against the raging floodwater.

"I was with my parents and my younger brother. I don't know where they are. I was carried away by the water but I was lucky as I clung to a tree until the water subsided," said Ngugi Njoroge from his hospital bed.

The Kenyan Red Cross estimates that up to 500 families were affected by the disaster.

The reservoir, known locally as "Patel dam" after the owner of the farm, is close to an informal settlement housing casual labourers.

On Friday morning Kenya's chief prosecutor Noordin Haji ordered the opening of a police investigation into the tragedy "to establish cause and culpability".

Government statistics released this week showed that more than 220,000 people have been displaced by flooding as heavy rains hit the country after three consecutive failed rainy seasons had left it in drought.

Since March, at least 21,000 acres (8,500 hectares) of farmland have been submerged in water with an estimated 20,000 animals killed, the Red Cross said last week.

Promoted
Listen to the latest songs, only on JioSaavn.com
The floods have also destroyed road networks in some parts of the East African country.

(Except for the headline, this story has not been edited by NDTV staff and is published from a syndicated feed.)
Comments
Kenya dam burstsSolaiPatel Dam