Jamal Khashoggi was killed in October last year by a team of Saudi agents.

Agnes Callamard, a human rights expert who is a special rapporteur for the Office of the U.N. High Commissioner for Human Rights, released a 101-page report on her months-long inquiry into Khashoggi's death at the Saudi Consulate in Istanbul.

The report provided new, grisly details of Khashoggi's death that Callamard gleaned from listening to audio provided by Turkish authorities. The audio captured Saudi agents discussing the dismemberment of Khashoggi's body before he arrived at the consulate, as well as his killing, the report said.

Callamard said the culpability for Khashoggi's killing extends beyond the 11 Saudis who are on trial in a closed-door judicial proceeding in Saudi Arabia. She called it an extrajudicial killing, possibly involving torture, for which the Kingdom of Saudi Arabia is responsible, and she said Saudi authorities had participated in the destruction of evidence.

Although Callamard said she found no "smoking gun" incriminating the crown prince himself, she said he had played an essential role in a campaign of repressing dissidents and almost certainly knew that a criminal mission targeting Khashoggi was being planned.

"Evidence points to the 15-person mission to execute Mr. Khashoggi requiring significant government coordination, resources and finances," she wrote. "While the Saudi government claims that these resources were put in place by Ahmed Asiri, every expert consulted finds it inconceivable that an operation of this scale could be implemented without the Crown Prince being aware, at a minimum, that some sort of mission of a criminal nature, directed at Mr. Khashoggi, was being launched." 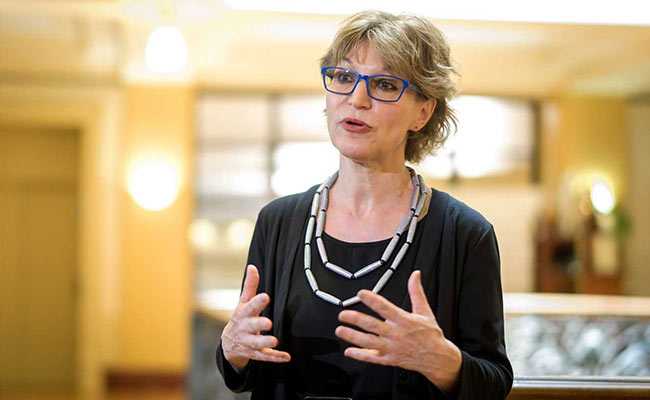 UN's Agnes Callamard painted a poignant picture of Khashoggi in her report, as if trying to bring him alive through his struggles and successes. (AFP)

Asiri, Saudi Arabia's former deputy head of intelligence, is one of two senior Saudi officials implicated by the kingdom's prosecutors in the killing, and the only senior official on trial.

Callamard's account of Khashoggi's death is the most definitive to date, even though her inquiry was hampered by Saudi Arabia's refusal to allow her to visit the kingdom to conduct interviews. The United States has so far avoided apportioning blame, saying it is still learning details.

Secretary of State Mike Pompeo and President Donald Trump have deplored the killing of Khashoggi, who was a contributing columnist for The Washington Post in the year before his death. But they have said the relationship with Saudi Arabia, a key ally in the administration's campaign against Iran, is too important to be sidetracked by a single incident.

Pompeo recently said the United States, invoking emergency powers due to the rising tensions with Iran, will sell weapons worth $8 billion to Saudi Arabia and the United Arab Emirates.

Callamard said she found insufficient evidence to conclude that either Turkey or the United States knew or should have known and warned Khashoggi of a threat to his life. Nor did she find evidence that U.S. intelligence had intercepted the crown prince's communications suggesting he wanted Khashoggi dead.

Callamard was harsh in her assessment of Saudi Arabia and its response to Khashoggi's death. She said the kingdom has taken only "timid steps" to prosecute 11 suspects. She noted that the trial is closed and that not even the names of the accused have been publicly released. Saying she was concerned about a miscarriage of justice, she called for the trial to be suspended.

Callamard said she was permitted to listen to audio recordings that captured events inside the consulate in the days before Khashoggi visited and on the day of his killing. They amounted to 45 minutes of conversation - a fraction of the seven hours of audio captured by Turkish intelligence.

Some of the audio was hard to make out. "For instance, on the basis of recordings, the Special Rapporteur could not reach firm conclusions about what [she and her investigators] were told was the sound of a 'saw' in operation. The Turkish authorities undoubtedly have more information and intelligence about events in the Saudi Consulate than they were willing or able to share with the inquiry," the report said.

According to the report, 13 minutes before Khashoggi entered the consulate on Oct. 2, two of the Saudi agents, Maher Mutreb and Salah Tubaigy, a forensic expert, discussed dismembering the body.

"Joints will be separated," Tubaigy told Mutreb. "First time I cut on the ground. If we take plastic bags and cut it into pieces, it will be finished." Khashoggi's name was not mentioned, but rather he was referred to as the "sacrificial animal" by Mutreb.

The report also said that Tubaigy "expressed concerns" about what was about to transpire, telling Mutreb: "My direct manager is not aware of what I am doing. There is no one to protect me."

The audio tape suggests they attempted to make Khashoggi believe he would be kidnapped, not killed, and repatriated to Saudi Arabia.

After Khashoggi arrived at the Saudi Consulate, he was invited to the consul general's office and asked whether he would return to Saudi Arabia.

"He responded that he wanted to return in the future," the report states.

But the Saudi agents, using the pretext of an Interpol warrant, said they were there to bring him back to the kingdom.

More conversation followed, the report said. Khashoggi insisted that people were waiting for him outside, as one of the agents tried to persuade him to send a message to his son. "What should I say?" Khashoggi asked. "See you soon? I can't say kidnapping."

"Type it Mr. Jamal," one of the agents replied. "Hurry up. Help us so that we can help you because at the end we will take you back to Saudi Arabia and if you don't help us you know what will happen at the end."

Then, in the recordings, "sounds of a struggle can be heard," the report said.

In her report, Callamard painted a poignant picture of Khashoggi, as if trying to bring him alive through his struggles and successes.

An important but traditionalist journalist in Saudi Arabia, Khashoggi changed his opinions as a consequence of the Arab Spring. Increasingly isolated by his views, he went into self-exile but had to leave his wife behind. Living in the Washington area, he had little income, little security and little status, making him lonely and unhappy, Callamard wrote. His decision to remarry suggested he was preparing to live a fuller, more settled life, she said.

Callamard's long-awaited report significantly amplifies her preliminary findings released in February. She said then that Khashoggi was "the victim of a brutal and premeditated killing, planned and perpetrated by officials of the State of Saudi Arabia." She said Saudi Arabia had "seriously curtailed and undermined" Turkey's attempts to investigate.

Khashoggi was killed Oct. 2 by a team of Saudi agents who were awaiting him at the Saudi Consulate in Istanbul when he went in to get some documents for his impending remarriage.

The Saudis initially insisted he had left the building, but it was later revealed that a body double had been sent out the back door while his fiancee waited outside near the front door. That was among the several turns in Saudi Arabia's story, including a claim that he died in a fistfight. But evidence emerged showing that he was killed inside the building, dismembered and his remains removed to an unknown location.

The CIA has determined it is likely that Khashoggi was ordered killed by the crown prince, the day-to-day ruler whom Khashoggi had sometimes criticized in his columns in The Washington Post.

The head of Saudi Arabia's Human Rights Commission, Bandar bin Mohammed al-Aiban, has called the reporter's death an "unfortunate accident." He said the kingdom will not agree to an independent, international investigation, because that would suggest doubt about "the integrity of our judicial apparatus."

Khashoggi's death has spurred international outrage and trained attention on the crown prince, tarnishing his reputation as a reformer. In March, 36 nations publicly censured Saudi Arabia and demanded an impartial and transparent investigation into Khashoggi's death.

So far, the United States has not joined the criticism. Pompeo said the administration is still working to identify the responsible parties, and he offered assurances that the United States will hold all accountable.