Russian Forces Show Might in Syria, and West Takes Notice 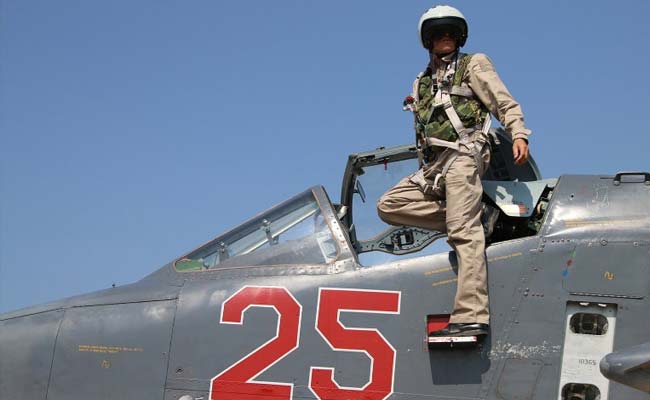 A Russian army pilot at the Hmeimim airbase in the Syrian province of Latakia. (Agence France-Presse photo)

Washington: Two weeks of air and missile strikes in Syria have given Western intelligence and military officials a deeper appreciation of the transformation that Russia's military has undergone under President Vladimir V. Putin, showcasing its ability to conduct operations beyond its borders and providing a public demonstration of new weaponry, tactics and strategy.

The strikes have involved aircraft never before tested in combat, including the Sukhoi Su-34 strike fighter, which NATO calls the Fullback, and a ship-based cruise missile fired more than 900 miles from the Caspian Sea, which, according to some analysts, surpasses the U.S. equivalent in technological capability.

Russia's jets have struck in support of Syrian ground troops advancing from areas under the control of the Syrian government and might soon back an Iranian-led offensive that appeared to be forming Wednesday in the northern province of Aleppo. That coordination reflects what U.S. officials described as months of meticulous planning behind Russia's first military campaign outside former Soviet borders since the dissolution of the Soviet Union.

Taken together, the operations reflect what officials and analysts described as a little-noticed - and still incomplete - modernization that has been underway in Russia for several years, despite strains on the country's budget. And that, as with Russia's intervention in neighboring Ukraine, has raised alarms in the West.

In a report this month for the European Council on Foreign Relations, Gustav Gressel argued that Putin had overseen the most rapid transformation of the country's armed forces since the 1930s.

"Russia is now a military power that could overwhelm any of its neighbors, if they were isolated from Western support," wrote Gressel, a former officer of the Austrian military.

Russia's fighter jets are, for now at least, conducting nearly as many strikes in a typical day against fighters opposing the government of President Bashar Assad as the U.S.-led coalition targeting the Islamic State has been carrying out each month this year.

The operation in Syria - still relatively limited - has become, in effect, a testing ground for an increasingly confrontational and defiant Russia under Putin. In fact, as Putin himself suggested Sunday, the operation could be intended to send a message to the United States and the West about the restoration of the country's military prowess and global reach after decades of post-Soviet decay.

"It is one thing for the experts to be aware that Russia supposedly has these weapons, and another thing for them to see for the first time that they do really exist, that our defense industry is making them, that they are of high quality and that we have well-trained people who can put them to effective use," Putin said in an interview broadcast on state television. "They have seen, too, now that Russia is ready to use them if this is in the interests of our country and our people."

Russia's swift and largely bloodless takeover of Crimea in 2014 was effectively a stealth operation, while its involvement in eastern Ukraine, though substantial, was conducted in secrecy and obfuscated by official denials of direct Russian involvement. The bombings in Syria, by contrast, are being conducted openly and are being documented with great fanfare by the Ministry of Defense in Moscow, which distributes targeting video in the way the Pentagon did during the Persian Gulf war in 1991.

That has also given officials and analysts far greater insight into a military that for nearly a quarter-century after the collapse of the Soviet Union was seen as a decaying, insignificant force, one so hobbled by aging systems and so consumed by corruption that it posed little real threat beyond its borders.

"We're learning more than we have in the last 10 years," said Micah Zenko, a senior fellow at the Council on Foreign Relations, noting the use of the new strike fighters and the new cruise missile, known as the Kalibr. "As it was described to me, we are going to school on what the Russian military is capable of today."

The capabilities on display in Syria - and before that in Ukraine - are the fruits of Russia's short, victorious war in Georgia in 2008. Although Russia crushed the U.S.-trained forces of Georgia's government, driving them from areas surrounding the breakaway region of South Ossetia, Russia's ground and air forces performed poorly.

The Russians lost three fighter jets and a bomber on the first day of the war that August, and seven overall, according to an analysis conducted after the conflict. Russian ground forces suffered from poor coordination and communication, as well as episodes of so-called friendly fire.

In the war's aftermath, Putin, then serving as prime minister, began a military modernization program that focused not only on high-profile procurement of new weapons - new aircraft, warships and missiles - but also on a less-noticed overhaul of training and organization that included a reduction in the bloated officer corps and the development of a professional corps of noncommissioned officers.

Russian military spending bottomed out in the mid-1990s but has risen steadily under Putin and, despite the falling price of oil and international sanctions imposed after the annexation of Crimea, it has surged to its highest level in a quarter-century, reaching $81 billion, or 4.2 percent of the country's gross domestic product, a common measure of military expenditure.

The Russian advancements go beyond new weaponry, reflecting an increase in professionalism and readiness. Russia set up its main operations at an air base near Latakia in northwestern Syria in a matter of three weeks, dispatching more than four dozen combat planes and helicopters, scores of tanks and armored vehicles, rocket and artillery systems, air defenses and portable housing for as many as 2,000 troops. It was Moscow's largest deployment to the Middle East since the Soviet Union deployed in Egypt in the 1970s.

"What continues to impress me is their ability to move a lot stuff real far, real fast," Lt. Gen. Ben Hodges, the commander of U.S. Army forces in Europe, said in an interview.

Since its air campaign started Sept. 30, Russia has ramped up its airstrikes from a handful each day to nearly 90 on some days, using more than a half-dozen types of guided and unguided munitions, including fragmentary bombs and bunker busters for hardened targets, U.S. analysts said.

Russia is not only bringing some of its most advanced hardware to the fight, but it has also deployed large field kitchens and even dancers and singers to entertain the troops - all signs that Moscow is settling in for the long haul, U.S. analysts said.
"They brought the whole package," said Jeffrey White, a former Middle East analyst with the Defense Intelligence Agency now at the Washington Institute for Near East Policy. "It showed me they could deploy a decent-sized expeditionary force."

For now, Russia's focus in Syria is mainly an air campaign with some 600 marines on the ground to protect the air base in Latakia. Putin has excluded the idea of sending in a larger ground force to assist the Syrians.

Michael Kofman, an analyst with the CNA Corp., a nonprofit research institute, and a fellow at the Kennan Institute in Washington who studies the Russian military, said that the operations over Syria showed that Russia has caught up to the capabilities that the United States has used in combat since the 1990s. That nonetheless represented significant progress given how far behind the Russians had fallen.

"Conducting night strikes, with damage assessments by drones, is a tangible leap for Russia into a mix of 1990s and even current Western combat ability," he said.

The Russian air force suffered a series of training accidents over the spring and summer - losing at least five aircraft in a matter of months - which Kofman described as "teething pains" as pilots increased operating tempo under Putin's orders. Even so, Russia's aviation is "often painted in the West as some sort of Potemkin village, which is not the case."

He and others said that the biggest surprise so far has been the missile technology on display. The cruise missiles fired from Russian frigates and destroyers in the Caspian Sea were first tested only in 2012. With a range said to reach 900 miles, they had not been used in combat before, and despite the loss of four cruise missiles that crashed in Iran in one salvo, they represent a technological leap that could prove worrisome for military commanders in NATO. He noted that the advances in missile technologies improved the precision and firepower even of aging, Soviet-era ships or aircraft.

"This is an amazingly capable new weapon," he added.

Russia's state television network boasted Monday that from the Caspian, they could reach the Persian Gulf, the Arabian Peninsula and the "entire Mediterranean Sea." It went on to note that trials of the missiles were underway aboard two ships in the Black Sea, which is bordered by three NATO allies: Turkey, Bulgaria and Romania.

The Moskva, a guided-missile cruiser that is the flagship of Russia's Black Sea Fleet, based in the newly annexed Crimea, has also deployed with other ships off the coast of Syria, providing air defenses for the aircraft and troops Russia has deployed. Those missiles effectively protect the skies over Syrian territory under control of the government from aerial incursions, and all but block the establishment of a no-fly zone in Syria, as many have called for.

U.S. officials say Russia has closely coordinated with its allies to plan its current fight. Maj. Gen. Qassim Suleimani, the head of Iran's paramilitary Quds Force, went to Moscow in late July in an apparent effort to coordinate on the Russian offensive in Syria, and he is also spearheading the Iranian effort to assist Iraqi militias.

U.S. officials, while impressed with how quickly Russia dispatched its combat planes and helicopters to Syria, said air power had been used to only a fraction of its potential, with indiscriminate fire common and precision-guided munitions used sparingly. It is clear the Russians are already harvesting lessons from the campaign to apply to their other military operations, said David A. Deptula, a retired three-star Air Force general who planned the American air campaigns in 2001 in Afghanistan and in the gulf war.

"Essentially," he said, "Russia is using their incursion into Syria as an operational proving ground."