The talks failed to achieve a breakthrough on a ceasefire or humanitarian issues but highlighted Turkey's role as a mediator in the two-week-old war. 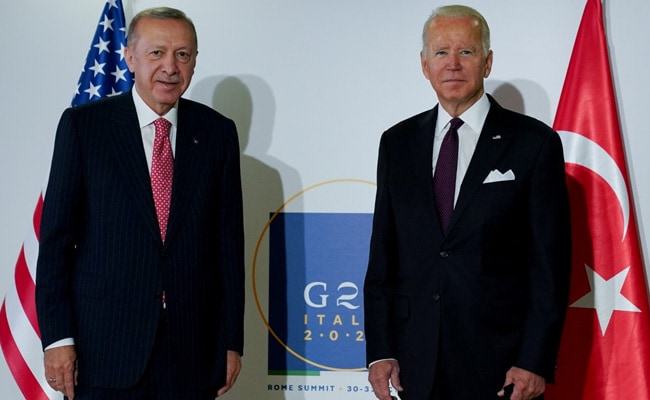 Ankara has close ties with Moscow and Kyiv and hosted a meeting between both countries top ministers.

Ankara has close ties with Moscow and Kyiv and hosted a landmark meeting between Ukrainian Foreign Minister Dmytro Kuleba and Russia's Sergei Lavrov in the southern resort city of Antalya on Thursday.

The talks failed to achieve a breakthrough on a ceasefire or humanitarian issues but highlighted Turkey's role as a mediator in the two-week-old war.

Erdogan said being able to talk to both sides and being a "facilitator" in the search for a resolution to the conflict mattered to Turkey during a 45-minute telephone call with Biden, according to the Turkish presidency.

The White House said President Biden "expressed appreciation" for Turkey's mediation efforts and that both leaders "reaffirmed their strong support" for Ukraine against Russian aggression.

According to the Turkish presidency's statement, Erdogan also demanded the lifting of "unfair sanctions" Washington placed on its fellow NATO member in 2019 after Turkey adopted a Russian defence system.

Ankara seeks to acquire 40 F-16 fighter jets and the spare parts needed to maintain and modernise its existing F-16 fleet.

Turkey spent $1.4 billion when it ordered F-35 stealth fighter jets, but the planes have not been delivered after the US froze the contract in 2019 over Ankara's purchase of Russia's S-400 anti-missile defence system.

The system is seen as a threat for F-35 jets, prompting Washington to exclude Turkey from its cutting-edge military programme.

Turkey has delivered combat drones to its ally Ukraine but also wants to maintain good relations with Russia, which it depends on closely for its tourism sector and wheat and energy supplies.