Russia's Gameplan For Ukraine: Where It Has Failed

Early capture of the cities of Melitopol, Berdyansk and Kherson allowed Russian forces to start carrying out what looks like a template for the war's stated goals -- repeated on Wednesday by Foreign Minister Sergei Lavrov -- of the "demilitarization" and "denazification" of Ukraine. 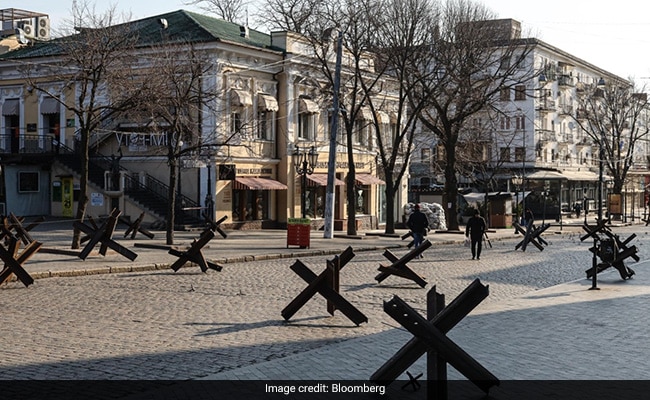 Anti-tank obstacles line a deserted street in the center of Odesa, Ukraine.

Nowhere in Ukraine has Russia's invasion gone to plan, but a combination of geography, better troops, shorter supply lines and weaker opposition means Moscow's campaign has progressed enough in the south to show what President Vladimir Putin at least intended.

Early capture of the cities of Melitopol, Berdyansk and Kherson allowed Russian forces to start carrying out what looks like a template for the war's stated goals -- repeated on Wednesday by Foreign Minister Sergei Lavrov -- of the "demilitarization" and "denazification" of Ukraine.

On Wednesday, both sides also indicated they were inching toward a potential cease-fire deal, even as major differences remain and Putin gave a televised speech about the "self-cleansing" power of current events for Russia that offered little obvious cause for hope.

After initial gains, the Russian military's southern advance has met resistance in Mariupol, Ukraine's easternmost port city, and Mykolayiv, the gateway to Odesa in the west, where the wide Bug river estuary makes a natural defensive barrier.

Still, a Russian breakthrough to take the entire coastline "would be a disaster for Ukraine, because 70% of our exports go by sea, 90% of our grain," said Hanna Shelest, Odesa-based director of security programs at Foreign Policy Council "Ukrainian Prism."

Beyond the economic and political importance of controlling Ukraine's access to sea ports, Russia could also secure a land bridge from Crimea -- the peninsula Putin annexed from Ukraine in 2014 -- to the Russian mainland, open rail connections for logistics and free up substantial manpower to support military goals elsewhere.

No less important is the political and propaganda importance of the region. Novorossiya, or New Russia -- the imperial era name for southern and eastern Ukraine -- is central to Putin's rhetoric that the two countries form one Russian nation.

In the first days of the invasion, Russian expectations seemed to be getting met. Its forces broke out of Crimea on the morning of Feb. 24 with little opposition and, for the next 10 days, proceeded across about about 500 km (311 miles) of coastline.

"The Russian military that has gone in from Belarus in the north is essentially the B team, while the more elite bits of the military that came from north east of Kyiv and the south have performed better," said General Richard Barrons, who retired as commander of the U.K.'s Joint Forces Command in 2016. "They were also on easier more open ground and had the big advantage of shorter supply lines, with a firm foot on the ground in Crimea."

On Feb. 26, Russian troops entered Melitopol, about 130 km northeast of Crimea. A day later it was Berdyansk, 120 km further west. On March 3 it was the turn of Kherson, 130 km northwest of Crimea, and with a population of 280,000 the only larger Ukrainian city to fall to Russian troops to date.

The treatment of these cities, as well as some smaller towns in the south, appears to have followed a blueprint. First, they were secured by the army. Next, units of Rosgvardia -- a well-armed Gendarmerie that performs a similar role to the Soviet-era special police -- moved in. Russian flags replaced Ukrainian ones at the main administrative centers.

In Melitopol, elected mayor Ivan Fedorov was abducted and marched across the town square by soldiers, according to fixed camera footage released by the office of President Volodymyr Zelenskiy.

Fedorov was replaced by Halyna Danylchenko, a local politician willing to collaborate. In a video address, she asked citizens to accept "the new reality" and stop "extremist" acts, an apparent reference to protests.

In Kherson, local politician Serhiy Khlan said house-to-house searches were being conducted in a hunt for pro-Ukraine security officials, journalists and activists, something Shelest said friends in Kherson had also told her.

Ukraine's Foreign Minister Dmytro Kuleba said Russia was trying to organize a referendum to declare a "Kherson People's Republic," analogous to the separatist Donetsk and Luhansk people's republics further east. Russian authorities have yet to confirm such a proposal.

On Wednesday, Putin said the "special military operation" he ordered in Ukraine was going to plan, but even in the south that looks unlikely. Far from hanging out their own Russian flags, thousands have gathered daily in Kherson to protest the occupation. In Berdyansk, smaller crowds chanted "go home". In Melitopol, protesters scuffled with Russian soldiers on March 14, as they demanded Fedorov's return.

On Wednesday, the Ukrainian presidential office said Fedorov had been freed in a special operation. It then released a video clip of Zelenskiy purportedly speaking to the Melitopol mayor in an audio call.

Mariupol, meanwhile, risks acquiring the totemic status of Vukovar or Sarajevo during the Yugoslav wars of the 1990s, sieges whose destruction and cruelty sparked indignation around much of the world and, eventually, contributed to more forceful international intervention. Thousands of civilians have escaped Mariupol this week. The city's theater, used as a bomb shelter by hundreds, was destroyed on Wednesday. Russia denied responsibility and says it does not target civilians.

Odesa will present an even bigger challenge for Russian commanders, because it holds a special place in Russian historical and cultural imaginations. So far, perhaps as a result, it has been spared the aerial bombing suffered by some other cities.

The city of just over 1 million traditionally has had a large pro-Russia population but if that support remains, it has yet to show itself. Instead, Mayor Gennadiy Trukhanov, who had a Russian passport until 2017, has been vocal in denouncing the Russian attack and has directed volunteers as they fill sandbags and make tank traps.

"They really hoped Odesa would raise the Russian flag," said Shelest. "Now it has to be an assault and that is not something easy for them to bear either psychologically or militarily."

First the Russian military will need to get past Mykolayiv and move the remaining 130 km to Odesa. Multiple efforts to break through or circumvent the town so far have ended in failure. 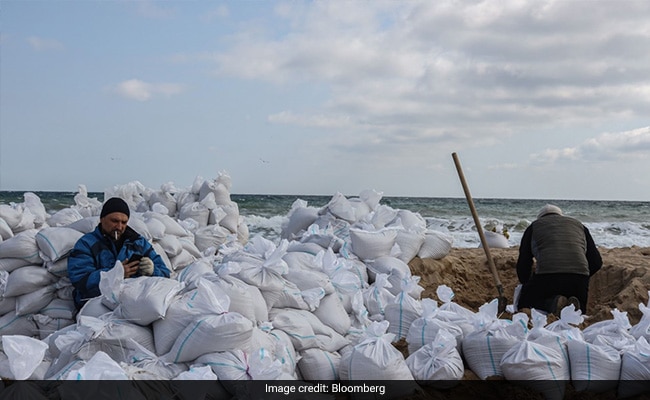 Volunteers fill sand bags at a beach in Odesa, Ukraine.

And while Russian landing craft have gathered off Odesa's Black Sea coast several times over the last two weeks as if to attack, a sea landing would be difficult. Suitable beaches have been mined and are defended, said Shelest. On reaching the city, there's every indication Russian troops would have to fight their way in.

Sealing Ukraine from the Black Sea in the south will likely remain a major strategic objective for Russia as long as fighting continues, according to Barrons, now chairman of Universal Defence & Security Solutions, a strategic consultancy of former military officers. Though wary of the firepower Russia still wields, he was skeptical that anything like Putin's original plan for Ukraine is still attainable.

"This is an occupation that will never work," Barrons said, and the reasons for Putin to look for an off ramp are mounting. The question for Odesa and other cities, he added, is just how far a frustrated Putin will be willing to go, including options such chemical weapons or ethnic cleansing, in his bid to control Ukraine.