Why Is Putin Obsessed With Ukraine? What Experts Say

Russia has surrounded Ukraine from three sides, like a horse shoe, say experts. The US has warned of serious consequences for Moscow if Kyiv is attacked. 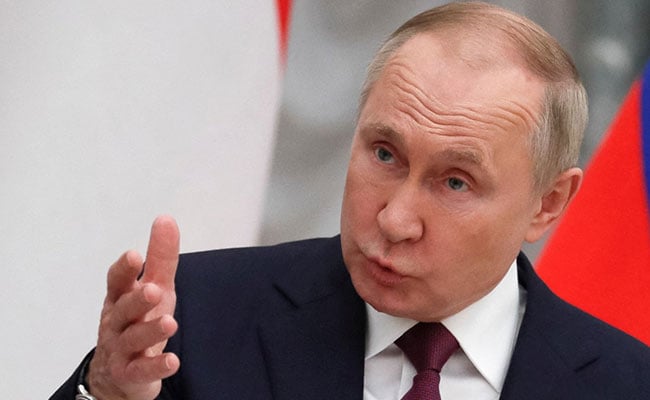 United States and its allies have been expressing concerns about the presence of Russian forces on Ukraine's border. Several diplomatic attempts have been made to persuade Russian President Vladimir Putin to order troop withdrawal, but the efforts have yielded little results.

The US and its allies say that more than 1.5 lakh Russian soldiers have been stationed just kilometres away from the Ukrainian border and are “ready to attack”. Friday's statement by US President Joe Biden that Russia could attack Ukraine “within days” is based on the assessments made by intelligence agencies and satellite images released by Maxar Technologies.

The images show that troops are present in Opuk and Yevpatoria railyard, in the territories that Russia seized from Ukraine in 2014. Then there are images of armoured vehicles and tanks in sites at Lake Donuzlav and Novoozernoye.

Russia has also sent troops to Belarus for a military exercise, surrounding Ukraine from three sides, which the West says is a preparation for attack unless Moscow's security demands are met.

So is this aggressive posturing just saber rattling, or is Putin serious about attack Ukraine? And what has been going on in his mind? Experts decode the Russian leader's world view and his obsession with Ukraine.

According to Fiona Hill, a senior intelligence officer and policy advisor who most recently served in the Trump administration, Putin's been trying to get a grip on Ukraine for years.

“They cut off the gas to Ukraine in 2006. He's been in power for 22 years, and the whole of that time, he's had Ukraine in the cross hairs one way or another, and it's intensified over time,” she told The New York Times.

“Putin wants to be the person who, on his watch, in his presidency, pulls Ukraine back into Russia's orbit. And he could be president until 2036, in terms of what's possible for him,” Hill added.

Hill, Washington's foremost experts on the Russian president, claimed this is personal for Putin who wants to create a “Russian empire”. “Ukraine is the outlier, the one that got away that he's got to bring back.”

In a 2015 speech, Putin famously called Ukraine the “crown jewel of Russia”, raising concerns among US intelligence agencies that he wants to annex the country. The statement was made just a year after Russia invaded and occupied the Crimea region of Ukraine, making use of sympathetic separatists.

As recently as July, 2021, the Russian President wrote an essay in which he called Russia and Ukraine as one people - “a single whole”. He blamed “divisive forces” for creating a wall between Russia and Ukraine. He then gave a historical perspective on why Ukraine should not be a separate country from “Mother Russia”.

Analysts say that Putin wants all the countries on Russia's periphery to be pro-Russian, and that is the reason why the overtures made by the Ukrainian government towards West-led NATO alliance made him angry.

“He wants his legacy to be like the czars of the past or the heads of the Soviet Union. He wants to take Russia to a level where it is feared, respected and treated seriously on the world stage,” John Sipher, former head of CIA's Russian programme, told CNN.

He added that Putin wants people to come to Russia to get their problems solved, and that is why the former KGB officer is flexing his muscle.

Meanwhile, Moscow denies it has plans to attack its western neighbour, but is demanding a guarantee that Ukraine will never join NATO and that the Western alliance remove forces from Eastern Europe. The West has, however, refused to accept these demands.