Russia Gas Explosion: A large section of the building collapsed after a gas explosion around 6am local time at the high-rise in the industrial city of Magnitogorsk, nearly 1,700 kilometres (1,050 miles) east of Moscow in the Ural mountains. 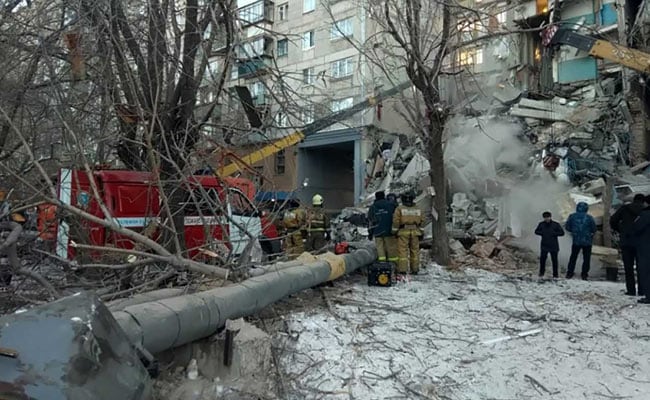 Russia Gas Explosion: Fate of 79 people was unclear with police working to locate their whereabouts.

Four people were killed and nearly 70 unaccounted for after a gas explosion tore through a residential building in Russia on Monday, leaving hundreds without a home in freezing temperatures on New Year's Eve.

A large section of the building collapsed after a gas explosion around 6am local time at the high-rise in the industrial city of Magnitogorsk, nearly 1,700 kilometres (1,050 miles) east of Moscow in the Ural mountains.

Four people were confirmed dead and another four, including two children, were hospitalised, officials said, citing the latest information.

Sixteen people including seven children have been evacuated.

The whereabouts of 28 people have been established but the fate of nearly 70 was unclear. National television said some 50 people could be trapped under the rubble.

National television broadcast footage of rescue workers combing through mangled heaps of concrete and metal in temperatures of minus 18 Celsius (minus 0.4 F).

Temperatures in Magnitogorsk were expected to plunge to minus 23 Celsius on New Year's night, the biggest holiday of the year in Russia.

Officials warned that two more sections of the Soviet-era high-rise on Karl Marx Street were in danger of collapsing.

The Kremlin said President Vladimir Putin had been "immediately notified of the tragedy in Magnitogorsk".

Located in the mineral-rich southern Ural region, Magnitogorsk, with a population of more than 400,000 people, is home to one of the country's largest steel producers.

The high-rise was built in 1973 and was home to around 1,100 people. Residents were evacuated to a nearby school.

Volunteers offered money, clothing and essentials to the victims, and some said they were ready to provide temporary shelter to those in need.

Staff from the local Magnitogorsk Iron and Steel Works (MMK), one of the country's largest steelmakers, took part in the rescue operation.

Billionaire Viktor Rashnikov, who controls the plant, called on city residents to help the victims.

"This is our common tragedy and pain," he said in a statement, adding that MMK would provide financial assistance to those in need.

Investigators opened a criminal probe into the accident, with the FSB security service confirming the blast had been the result of a gas explosion.

Such deadly gas explosions are relatively common in Russia where much of the infrastructure dates back to the Soviet era and safety requirements are often ignored.

(Except for the headline, this story has not been edited by NDTV staff and is published from a syndicated feed.)
Comments
Russia gas explosionMoscowVladimir Putin