Remember 'One Pound Fish'? His family's hoping for a Christmas number 1 hit 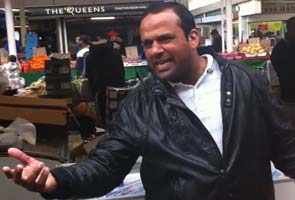 Pattoki, Pakistan: The mother of Pakistani Internet sensation One Pound Fish Man is praying to Allah that her son has a Christmas No.1 hit so his wife and children can join him for a new life in Britain.

When Muhammad Shahid Nazir left his four children behind in Pakistan to study business in London, he could never have imagined he would one day be cavorting in a Warner video with scantily-clad Western beauties, singing about fish.

Nazir, who got a job as a fishmonger in east London's Queens Market in Upton Park, came up with a song to entice customers in which he urged local women to part with one pound ($1.60) for a single, glistening fresh fish.

Shoppers were charmed and after someone filmed a video and uploaded it on YouTube the song went viral and Warner Music offered Nazir a record deal.

A slicker version with Nazir shimmying and strutting Bollywood-style in a natty suit went up on December 10, launching the race to top the Christmas charts in Britain.

The original video has had a staggering 4.6 million hits, while the professionally produced one already has more than two million. Nazir has also gained nearly 28,000 followers on Twitter.

Back at the family home in Pattoki, a small town 146 miles (234 kilometres) south of Pakistan's capital Islamabad, his delighted 67-year-old mother Kalsoom says she is praying and fasting for Nazir's success.

"I appeal to people in Pakistan and abroad to give this song as many hits as possible. I am fasting and saying special prayers for my son so that his song appears as number one," she told AFP at the affluent family home.

Nazir's family run their own business in Pattoki where they settled after migrating from India to the new Pakistan when Britain closed the curtain on the empire in the sub-continent.

Today, they say they have been nicknamed locally as the "One Pound Fish" family and that people are flocking to download the song onto USBs and CDs.

Nazir's father was initially reluctant to let his middle son go off to England, "but now he is also very happy", Kalsoom said.

If her son gets a work visa, she said, he should take his wife and children with him to Britain.

British newspaper The Sunday Times reported this month that Nazir is under investigation by the Home Office over a potential breach of the terms of his student visa after he ditched his studies to work as a fishmonger.

Nazir's wife Kashifa, dressed in the traditional shalwar kameez with a dupatta over her head, smiles when asked if she is jealous of her husband dancing with half-naked girls in the video.

"I have no problem with this nor am I getting jealous. He performed the song and it was a requirement for the video," she said.

She says she spoke to her husband of 12 years in recent days, describing him as a "loving husband and father" despite his departure for London in May last year.

"I am really very excited. We never imagined that my husband would become so popular. Our children and I miss Shahid a lot and we want to join him in London to share these happy moments," she said.

The whole family can sing the song, mimicking Nazir. When AFP visited, his three-year-old daughter Sania was only too happy to belt out the lyrics.

His four brothers and their families live with their mother and Nazir's wife in the extended family system common in Pakistan. For now they hope that Nazir will soon be back for a visit.

"People in our town often call us the One Pound Family. I think my brother will come back soon," said elder brother Abid, who works for the family business.

"He got all this fame because he has been very responsible and dedicated since childhood and it is for this reason that luck also sided him."