Design work on a second Antonov An-225 cargo plane, also known as the Mriya -- "dream" in Ukrainian -- has begun, according to a statement posted on Facebook Monday by state-owned Antonov Co. 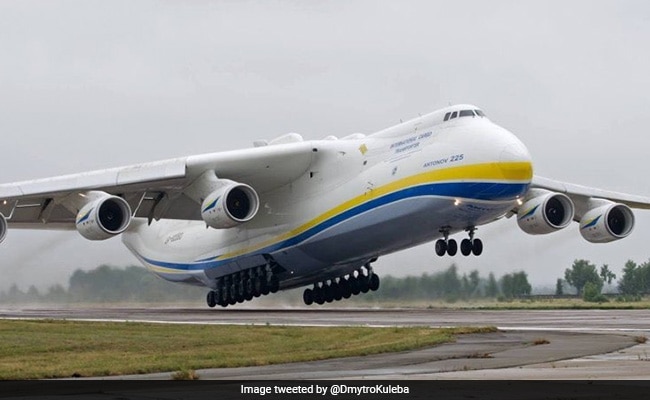 About 30% of the components from the original plane can be used in building a new version. (File)

Plans are being made to rebuild the world's largest plane first destroyed by Russian forces in the early days of its invasion of Ukraine -- though its manufacturer says such a goal remains far off.

Design work on a second Antonov An-225 cargo plane, also known as the Mriya -- "dream" in Ukrainian -- has begun, according to a statement posted on Facebook Monday by state-owned Antonov Co., which said exact details will only be specified once Russia's war in Ukraine ends.

It was not immediately clear how financing will be obtained for such an effort, with Ukraine's economy under significant stress due to Russia's assault, and the power supply curbs in place due to Russian air-attacks on energy infrastructure. Antonov's parent company, state-run Ukroboronprom initially said after the aircraft's destruction that restoring it would take more than five years and cost over $3 billion.

Antonov said about 30% of the components from the original plane can be used in building a new version after assessment by experts. It said it was responding to what it called "inaccurate" reports by German newspaper Bild and Ukrainian media that work on the aircraft had already begun.

This was the world's largest aircraft, AN-225 ‘Mriya' (‘Dream' in Ukrainian). Russia may have destroyed our ‘Mriya'. But they will never be able to destroy our dream of a strong, free and democratic European state. We shall prevail! pic.twitter.com/TdnBFlj3N8

Bild had originally cited an interview with Antonov General Director Eugene Gavrylov, who said that the company plans to sell merchandise like models of the plane and pictures in Germany's Leipzig/Halle Airport to raise cash and attract sponsors.

The six-engine jet first flew in December 1988. It was used to transport Covid-19 vaccines around the world during the pandemic, before its destruction made it a symbol of Ukraine's defense against Russia's invasion. Political figures such as Foreign Minister Dmytro Kuleba have used it as a rallying cry, while it has also appeared on items like national stamps.