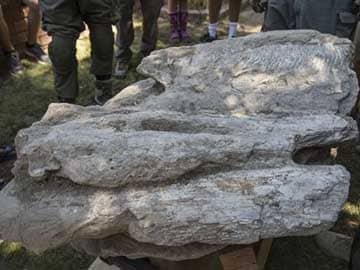 Members of the Los Angeles Sheriff's Department Search and Rescue team stand around a 16-17-million-year-old fossil lodged in a rock weighing about 2,000-pounds after it was lifted out of a hole in Rancho Palos Verdes, Calif. on Friday, Aug. 1, 2014.

Rancho Palos Verdes: A rare whale fossil has been pulled from a Southern California backyard.

Promoted
Listen to the latest songs, only on JioSaavn.com
The fossil, lodged in 1,000-pound (454-kilogram) rock, was hoisted from a ravine by Los Angeles County Sheriff's Department search-and-rescue volunteers. Using pulleys and a steel trolley, crews pulled the fossil up a steep backyard slope and into a truck bound for the museum.

The fossil was discovered by 53-year-old Gary Johnson when he was a teen exploring the creek behind his family's home. Johnson called Thomas after a whale fossil was recovered in January at a nearby school.