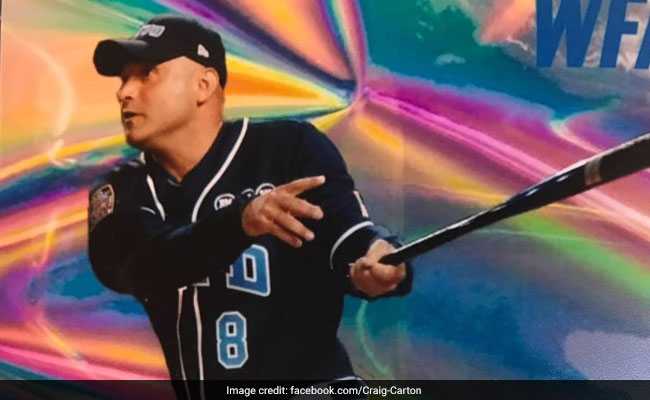 Craig Carton, who was heard daily on WFAN-AM's "Boomer and Carton".

Craig Carton, once the co-host on the highest-rated morning-radio sports-talk show in the New York area was sentenced to 3 1/2 years in prison for fleecing investors who gave him and his cohorts millions of dollars to buy and resell tickets to prominent concerts, musicals and sporting events.

Carton, who was heard daily on WFAN-AM's "Boomer and Carton," was the highest-profile defendant in a crackdown on the largely unregulated $15 billion ticket-resale industry, in which middlemen snatch up blocks of tickets and resell them at inflated prices.

"Hello, Mr. Carton. Colleen M. from New York. First time, long time," the judge said, before handing down the sentence. But then she got serious.

"You've lost everything worth having," McMahon said. "It's pretty horrible. And you did it to yourself."

"If it sounds like a little bit like what a guy named Madoff did, that's because it is," McMahon continued.

Carton was found guilty in November of defrauding investors by using fake contracts to raise money for the ticket venture, and then using it himself.

Jurors deliberated for less than five hours before convicting Carton of conspiracy, wire fraud and securities fraud. Prosecutors painted Carton as a desperate gambler continually seeking funds to satisfy a mountain of debt, going from one investor to another, looking for more sources of capital.

Under federal sentencing guidelines, Carton faced between six and seven years in prison. In asking the judge to sentence him within that range, prosecutors said his arguments that he gave to charities, had a gambling problem and suffered as a result of childhood trauma ignore the fact that he "perpetrated a deliberate, extended and serious fraud."

"Carton's fraud was not the result of an isolated loss of impulse control or a one-time stumble when faced with purported 'crushing gambling debts,' " prosecutors said in a memo. "Nor was it an an arms-length fraud against anonymous or faceless counter-parties. Instead, over a period of months, Carton repeatedly met with his victims, communicated with them and lied to them."

Carton's lawyer Derelle Janney told the judge that Carton has a "severe gambling addiction" that stemmed from the trauma of a childhood rape and that he sought treatment soon after he was arrested.

"Just because there is an outward appearance of success, in terms of money or property, does not mean that prior trauma would not lead them to commit wrongful acts," Janney said. "Some people can not overcome that level of trauma and Mr. Carton could not and did not."

In an earlier memo to the judge, Carton's lawyers said he has been devastated personally, professionally, financially and reputationally.

"His family has been uprooted and tarnished beyond repair," they wrote.

"I had it all, I had everything a person could ever want in life," Carton said in a letter to McMahon before sentencing. "I literally threw it all away and in doing that to myself I unfortunately hurt others as well."