Reports found that an estimated 2,975 deaths could be attributed directly or indirectly to Maria from the time it struck in September 2017 to mid-February. 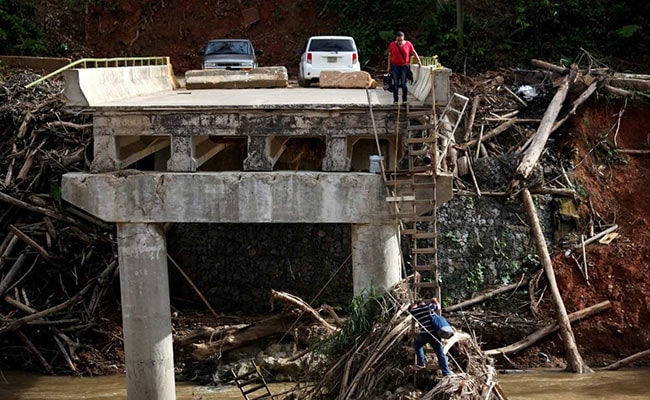 Puerto Rico's official death toll from Hurricane Maria, the most powerful storm to hit the Caribbean island in almost a century, was raised on Tuesday from 64, a number widely discounted as far too low, to nearly 3,000, based on a study ordered by the governor of the US territory.

The report found that an estimated 2,975 deaths could be attributed directly or indirectly to Maria from the time it struck in September 2017 to mid-February of this year.

By comparison, deaths blamed on Hurricane Katrina in 2005 range from about 1,200 to more than 1,800, most along the Gulf Coast of Louisiana and Mississippi.

The latest Puerto Rico figure was derived from comparisons between predicted mortality under normal circumstances and deaths documented after the storm, a number that turned out to be 22 percent higher.

Researchers said they adjusted for various factors that could account for fluctuations in mortality, most notably the displacement of some 241,000 residents who fled the island in the immediate aftermath of the storm.

They also found that the poor and elderly were disproportionately hard hit in terms of risk of fatalities.

The emergency response to Maria became highly politicized as the Trump administration was castigated as being slow to recognise the gravity of the devastation and too sluggish in providing disaster relief to Puerto Rico, an island of more than 3 million residents.

The storm made landfall with winds close to 150 miles per hour (241 km per hour) on Sept. 17 and ploughed a path of destruction across the island, causing property damage estimated at $90 billion and leaving much of the island without electricity for months.

It was the third major hurricane to hit the United States with lethal force in less than a month last year, following Harvey in Texas and Irma in the Caribbean and Florida.

The disconnect between the administration's initial sanguine assessment of the situation and the enormity of the disaster was evident 12 days into the crisis when Elaine Duke, then acting U.S. homeland security secretary, characterized the federal response as "a really good news story" and spoke of a "limited number of deaths."

In a scathing reaction, San Juan Mayor Carmen Yulin Cruz appeared on CNN declaring, "Damn it, this is not a good news story. This is a people-are-dying story. This is a life-or-death story."

In early October 2017, Trump expressed satisfaction with the federal response to Maria, saying it compared favourably with a "real catastrophe like Katrina."

The storm's death toll has remained controversial as unofficial inquiries and independent research suggested the loss of life was far higher than 64 people formally counted as having perished.

Tuesday's study, conducted by George Washington University's Milken Institute School of Public Health and released on Tuesday, was billed as the most comprehensive yet.

White House press secretary Sarah Sanders said the administration supported "efforts to ensure a full accountability and transparency of fatalities" from the hurricane.

But U.S. Representative Nydia Velazquez, a New York Democrat, said the study was "only the latest to underscore that the federal response to the hurricanes was disastrously inadequate, and as a result, thousands of our fellow American citizens lost their lives."

The second phase of the study will examine causes and contributing factors behind the deaths, said Carlos Santos-Burgoa, a professor of global health who was the lead investigator of the study.

Santos-Burgoa said the high death toll, ranking Maria among the worst natural disasters in U.S. history, was evidence that "we lack a culture of preparedness." He said financial instability and a fragile infrastructure made Puerto Rico especially vulnerable to such calamities.

The report was conducted in collaboration with the University of Puerto Rico Graduate School of Public Health and commissioned by Puerto Rico Governor Ricardo Rossello.

Speaking at a news conference in Puerto Rico's capital, San Juan, Rossello said his government was adopting the findings as the official account of human life lost in the disaster, "even though it is an estimate."

"We will take the 2,975 number as the official estimate for the excess deaths as a product of the hurricane," he said.

Researchers attributed undercounting of storm-related deaths to poor communications and the lack of well-established guidelines and training for physicians on how to certify deaths in major disasters.

In May a Harvard University-led research team estimated that 4,645 lives were lost from Maria on Puerto Rico. A Pennsylvania State University study put the number at 1,085..