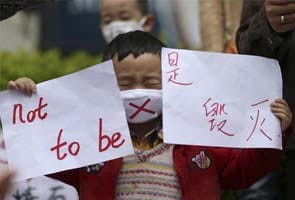 Beijing: Hundreds of people took to the streets of the Chinese city of Kunming on Saturday to protest against a planned refinery, in the latest show of concern over the effects of rapid growth on the environment.

China's increasingly affluent urban population has begun to object to the model of growth at all costs that has fueled the economy for three decades, with the environment emerging as a focus of protests.

Photographs on Weibo, China's version of Twitter, showed a crowd of protesters. Some people estimated the crowd in the center of the southwestern city was up to 2,000-strong.

They were particularly concerned about the planned production at the plant of paraxylene (PX), a chemical used in making fabrics and plastic bottles.

"Give me back a beautiful Kunming. We want to survive, we want health, get PX out of Kunming", read one of several banners the protesters carried.

A man at the Kunming Public Security Bureau, who described himself as a member of staff on duty, said he was not aware of the incident. The city government's emergency department referred a phone call to another number, which was not answered.

Last November, the eastern city of Ningbo suspended a petrochemical project after days of street protests. The year before, big protests against a PX plant in the northeastern city of Dalian forced the city government to suspend it.

Promoted
Listen to the latest songs, only on JioSaavn.com
More recently, heavy pollution that has blanketed the capital Beijing and other cities, as well as scandals over food, have added to the sense of unease.