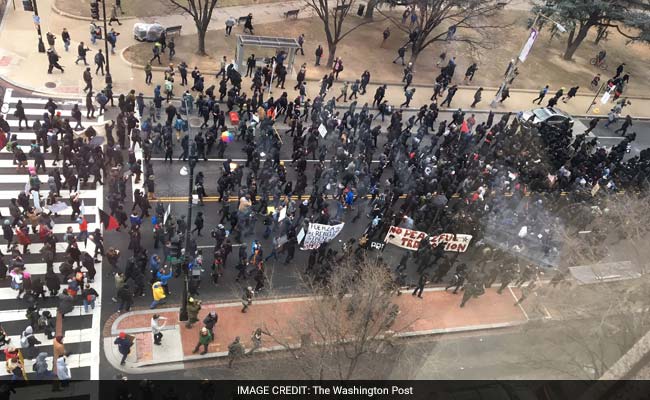 Protesters threw fireworks and broke glass at bus stops, businesses and on the windows of a limousine.

Washington: Protesters made themselves heard in the nation's capital Friday, leaving a trail of damage along some city blocks, disrupting security checkpoints at President Donald Trump's inauguration, and clashing with police as Trump supporters tried to celebrate.

As people poured into the city to watch Trump sworn in as the 45th president, they encountered protesters across the area throughout the day. Many of the demonstrations were nonviolent, with people holding signs that spoke to their causes and concerns. One protest even took on a carnival atmosphere, with puppets, stilt walkers and a giant inflatable elephant wearing a sign that read "racism." But other groups tried to disrupt the day's events by burning flags, throwing bricks and rioting en masse, leading to injuries and nearly 100 arrests by early afternoon.

Six people intent on interrupting the presidential swearing-in ceremony made it into the closest section of seats to Trump. They wore shirts that spelled out "R-E-S-I-S-T" and got up and started shouting "We the people!" as Trump took the oath of office at noon. As authorities removed them from the area, they raised their fists and shouted "USA! USA!" One woman yelled, "We're for an America for all of us."

After the swearing in, protesters arrived at the Franklin Square area and clashed with police. The protesters were throwing rocks, bricks and chunks of concrete and taking newspaper boxes and barriers and putting them on the streets. Meanwhile police appeared to be using a flurry of flash-bang grenades and chemical spray to hold the protesters back, pushing them block-by-block west along K Street, from 12th Street toward 14th Street.

During the afternoon clash, the protesters started a fire in the middle of the street using garbage bins and newspaper boxes, and some climbed trees and light poles. About 100 officers in riot gear, carrying shields, stood in a line blocking off K Street. 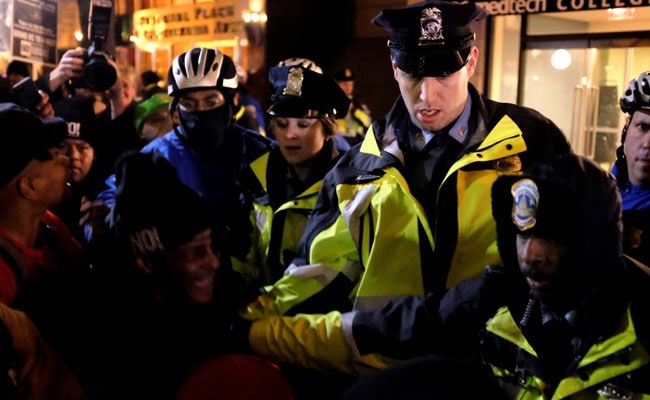 Authorities used chemical spray in an attempt to disrupt the vandalism

"It's a little jarring when you're in a peaceful march with drumming and chanting and the next thing you know flash bangs are going off around you," said Daniel Hultquist, a protester from Rhode Island. "People that throw rocks and bricks are undermining the cause."

When one police SUV tried to drive through the crowd, several protesters dressed in all black tried to block it; when the SUV sped up, pushing the protesters aside, one picked up a rock, threw it, and smashed the vehicle's rear window. At about 4:15 p.m., as the inaugural parade took place blocks away, protesters set a car on fire along K Street, sending plumes of dark smoke through downtown.

Trump supporters and protesters clashed throughout the day at several locations, and it sometimes turned violent. Six officers were injured, including an officer who was struck by an object that had been thrown, said Doug Buchanan, a spokesman for the D.C. Fire and Emergency Medical Services. Another officer was struck by a thrown object on K Street in the late afternoon and was taken to a hospital.

During the morning protest, a large group of black-clad protesters - self-described as anti-capitalist and antifascist - made their way south on 13th Street near K Street, throwing newspaper boxes and garbage cans into the street and trying to set them on fire, leaving them smoldering. They also threw fireworks and broke glass at bus stops, businesses and on the windows of a limousine. 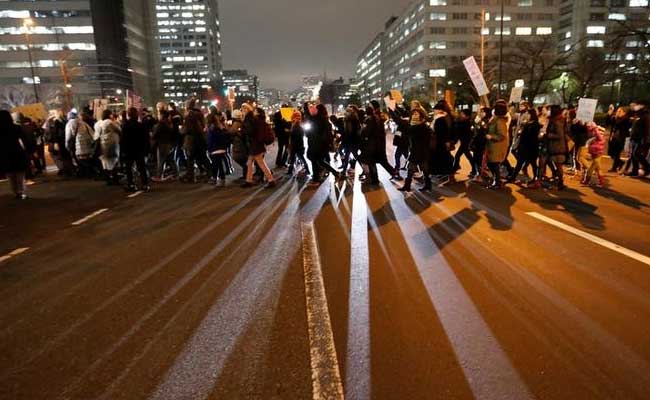 Many of the demonstrations were also nonviolent, with people holding signs that spoke to their causes

Police cleaned up behind them as they marched, and authorities used chemical spray in an attempt to disrupt the vandalism. They ultimately herded the group away from the inauguration parade route with a large number of police vehicles and officers in riot gear, and they used concussion grenades - which make a loud noise - to break up the crowd.

District of Columbia Interim Police Chief Peter Newsham said officers arrested 217 people in connection with protests that turned violent and caused "significant damage to a number of blocks in our city." He said officers handling the protests did not deploy either flash-bang or percussion grenades - used to disorient people in crowds - and that protesters had their own. But numerous Washington Post reporters saw officers throw such grenades.

Newsham said a "a very small percentage" of the thousands who came to demonstrate the inauguration resorted to violence. Police said those arrested were charged with rioting.

"It's disappointing that it had to happen," Newsham said, praising how officers responded. "We knew this was going to be a long day. . . . Anyone who thinks they can come here and break the law, we will take them into custody."

At least one bystander, a middle-aged man, was injured when the grenades went off; he was hit in the head, which was cut and bleeding.

Another man, Robert Hrifko, 62, who rode his Harley Davidson motorcycle up from St. Augustine, Fla., to join the Bikers for Trump group, approached several firemen and asked: "Do you think I need stitches?"

A welt on his cheekbone dribbled blood. He said a man hit him with rock after he tackled a protester who was attempting to throw an aluminum chair at a police officer.

"Bam - just waylaid me," he said. The firemen offered him a Band-Aid and said he would be all right. "Good, I ain't got insurance anymore, because I can't afford Obamacare."

Mayor Muriel E. Bowser tweeted that she respects the rights of protesters but "will not condone crime and vandalism which are the antithesis of what we hope to accomplish today." She also wrote: "To those of you visiting Washington, D.C. we welcome you but we cannot allow you to destroy our neighborhoods."

Protesters jammed city streets and also aimed to jam checkpoints to the inauguration, at times successfully.

"Shut it down!" protesters shouted at the checkpoint at John Marshall Park early Friday morning. There, five black men stood at the front of the crowd, chained together, blocking the path.

Hailing from different parts of the country, the men were protesting on behalf of the Black Lives Matter movement. As they stood together, they shouted that by demonstrating, "all we have to lose is our chains."

Michael Henning came from Dalton, Ohio, to see the events on the National Mall and expressed frustration with how police handled the situation.

"We drove 20 hours, and now we can't get in," Henning said. "Everyone should have just brought guns and had it out, I'd be happy if they just dropped a bomb on them."

One protester was arrested after sprinting up 13th Street and taunting a small group of officers chasing him. As he passed a D.C. fire station, cheers could be heard behind the glass of the garage doors: "Get him! Get him!" When a young man in a hoodie - apparently an undercover police officer - bolted from the side and brought the protester down on the sidewalk with a flying tackle, a cheer arose from inside the station.

"I'm not resisting, I'm not resisting," the protester said from beneath a pile of three officers. "How are you all doing today?" he said, just before being helped to his feet, his hand in restraints.

It is unclear how many protesters descended on the nation's capital for the inauguration, but law enforcement officials were bracing for more than 60 demonstration groups, both in support of and against Trump. About two dozen groups have received permits for specific gathering spaces for Friday and Saturday, when the Women's March will take over the streets. According to their permit requests, some of those groups Friday were anticipating as few as 20 participants; others were planning for tens of thousands.

Many protesters participated in nonviolent demonstrations Friday. One man brought three llamas named Shay, Tragically Cute, and Thaddeus from a farm in Lancaster, Pa. Other groups protested silently, letting their signs speak for them.

"I just wanted my voice to be heard," said Sharae Cloak, who stood quietly with two friends. "It's a sad day in America, in the world. I didn't want to be one of those people who complains and sits at home."

But at least one organization had vowed to try to shut down the city. Organized under activist collective Disrupt J20, that group arranged to have different organizations gather at each of the dozen checkpoints that inauguration ticket holders had to pass through to view the ceremony. Each aimed to speak to a different cause, organized under names that include: Future is Feminist, Movement for Black Lives, Standing Rock for Native Lives, Economic Justice and Communities under Attack.

At one checkpoint, a group of LBGT protesters held a banner that read: "Out of the Closet. Into the Streets" and danced along to Abba and Madonna. They blew whistles and horns and filled the wet pavement with blue and purple glitter.

"We are here as a celebration of all the rights we have achieved as a movement and to stand up for ourselves," said Mike Mcvicker-Weaver, 40, an HIV health care worker from Baltimore.

Not all of the demonstrations on Friday were anti-Trump. Among those groups that requested permits for space were two organizations that support him: Bikers for Trump and Let America Hear Us, Roar for Trump.

The latter shared Dupont Circle with a group that did not request a permit but set up there early Friday - DCMJ, which was formerly known as the D.C. Cannabis Campaign and was behind the successful effort to legalize marijuana in the District in 2015.

The group, which started rolling joints this month, planned to hand out 4,200 before marching to the Mall. Once there, those who get through the security checkpoints - a problem because it is illegal to possess marijuana on federal land, which includes the Mall - planned to light up four minutes and 20 seconds into Trump's speech.

A 40-year-old pot grower named Josh stood near Dupont Circle Friday morning, controlling the line, which stretched up Massachusetts Avenue. He said he had donated a half-pound of his own weed for the giveaway.

"I'd appreciate it if you don't do any illegal here," Josh told the crowd. "If you want to do something illegal, take it down the block."
Nikolas Schiller, co-founder of DCMJ, said the demonstration is not a protest of Trump but a signal of wanting to work with him on fully legalizing cannabis in all 50 states and the District.

"This is about demonstrating to Trump that he has the power to change the law and do what Obama was not able to do," Schiller said. "We believe cannabis legalization will create jobs, it will increase tax revenue, and it will also help fix the broken criminal justice" system.

As for the bikers they will be sharing space with Friday, he said, "We hope some come on over and get a free joint."

Another organization, the ANSWER Coalition, planned to host a large gathering at the U.S. Navy Memorial on Pennsylvania Avenue.

Ben Becker of ANSWER said that more than 45,000 people indicated through social media an interest in joining the group's protest near the U.S. Navy Memorial on Pennsylvania Avenue. The group, which stands for Act Now to Stop War and End Racism, had a 28-foot stage and large sound system set up there and plans to showcase speakers and performers throughout the morning and afternoon.

Promoted
Listen to the latest songs, only on JioSaavn.com
"The main message is that there is going to be a grass-roots movement of resistance to the Trump agenda from Day One of his presidency."

(This story has not been edited by NDTV staff and is auto-generated from a syndicated feed.)
Comments
President Donald TrumpTrump's inaugurationdisrupting security checkpointsTrump supportersprotestsFirevandalism

1 Police Officer Killed, 1 Injured In Shooting Incident In US