President Kovind said it was an honour for him to unveil Mahatma Gandhi statue as the legend belonged to the entire world. 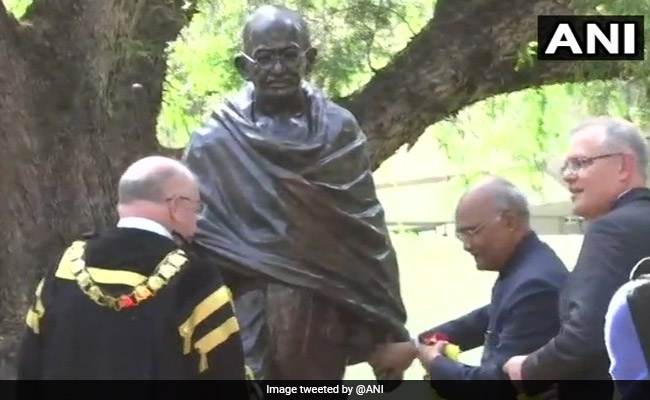 President Kovind was accompanied by his wife Savita Kovind and daughter Swati for statue unveiling.

President Ram Nath Kovind on Thursday unveiled a bronze statue of Mahatma Gandhi in the Australian city of Sydney and said his powerful message of non-violence and peaceful coexistence is relevant in these times of strife.

Marking the ongoing celebrations of the 150th anniversary year of the Mahatma along with Australian Prime Minister Scott Morrison, President Kovind said it was an honour for him to unveil the statue as the legend belonged to the entire world.

Mr Kovind, the first-ever Indian head of state to visit Australia, arrived in Sydney on Wednesday on the second leg of his two-nation trip. During the first leg, he visited Vietnam.

Two photographs posted by the official Twitter handle of the President of India showed the striking bronze statue garlanded with flowers.

In one of the photographs, President Kovind, First Lady Savita Kovind, Australian Prime Minister Scott Morrison and Mayor of Paramatta Andrew Wilson were seen in front of the statue.

Members of Indian community were also present at the event and raised slogans of "Bharat Mata Ki Jai" and "Vande Matram".

Acknowledging the presence of Premier Morrison, President Kovind said, "This initiative has a very special meaning to help spread Mahatma Gandhi's legacy and timeless message across the world."

"His universal teachings have a special resonance in all corners," he said.

President Kovind said Gandhi and the Australian society struck a common cord as he too was a strong supporter of multi-cultural ethos, like Australia. He said Gandhi's message of non-violence and peaceful coexistence stands all the more relevant in these times of strife.

"As a country which is home to people from every part of the world, Mahatma Gandhi's legacy cannot be more relevant to its values and ethos," President Kovind said before unveiling the statue.