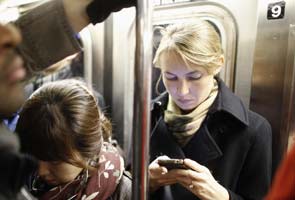 Trains were so crowded on Monday on the Long Island Rail Road that dozens of people missed their trains. With PATH trains between New Jersey and Manhattan still out, lines for the ferry in Jersey City quickly stretched to several hundred people by daybreak.

One commuter in line pleaded into his cellphone, "Can I please work from home? This is outrageous," but many more took the complicated commute as just another challenge after a difficult week.

"There's not much we can do. We'll get there whatever time we can, and our jobs have to understand. It's better late than absent," said Louis Holmes of Bayonne, as he waited to board a ferry in Jersey City to his job as a security guard at Manhattan's September 11 memorial site.

The good news in New York City was that, unlike last week, service on key subway lines connecting Manhattan and Brooklyn under the East River had been restored. But officials warned that other water-logged tunnels still weren't ready for Monday's rush hour and that fewer-than-normal trains were running - a recipe for a difficult commute.

On Long Island, Janice Gholson could not get off her train from Ronkonkoma and Wyandanch because of overcrowding, and ended up overshooting her stop.

"I've never taken the train before. There were people blocking the doorway so I got stuck on the train," she said.

Mayor Michael Bloomberg took the subway to work on Monday. He was joined by many of the students returning to class in the nation's largest school system. About 90 per cent of the 1,700 schools reopened for the first time since Sandy hit last on Monday, the mayor said.

"You don't really realize how important a routine is until you're out of one," said 17-year-old Anna Riley-Shepard of the Upper West Side as she waited for her yellow school bus to her private school in the Bronx. Usually a 15 to 20 minute trip.

"We are in uncharted territory with bringing this system back because of the amount of damage and saltwater in our system," Mr Lhota said. "It's an old system and it's just had a major accident."

World Trade Center steam fitter Scott Sire got to Manhattan on time, at 6:05 am off a regular Academy bus that took him from home in Hazlet, New Jersey in 40 minutes. He normally takes a PATH train, but it's not running.

"Every day gets a little bit better," said the 49-year-old worker. "But we had a setback last night; we lost power, again, after a transformer blew and the Cowboys lost, just after our lights went out!"

The MTA planned to take the unusual step of using flatbed trucks to deliver 20 subway cars to the hard-hit Far Rockaway section of Queens and set up a temporary shuttle line.

Superstorm Sandy which killed more than 100 people in 10 states, caused massive power outages and left tens of thousands in need of emergency housing and also created a fuel shortage that has forced New Jersey to enforce odd-even rationing for motorists. But there was no rationing in New York City, where the search for gas became a maddening scavenger hunt over the weekend.

Manhattan doorman Iver Sanchez, who lives in Queens, waited at an Upper West Side gas station for three hours and still had a long line of cars ahead of him.

In New Jersey, Monday promised to begin the return to some everyday activities. About half the school districts reported they will reopen and New Jersey Transit said it would have more train and bus service restored in time for the workweek. Philadelphia's transit authority loaned 31 buses that New Jersey Transit planned to use to support shuttle service for commuters traveling to New York City.

The coming week could bring other challenges - namely an Election Day without power in polling places, and a nor'easter expected hit the area by Wednesday, with the potential for 55 miles per hour gusts and more beach erosion, flooding and rain.

In New York, power has been restored to nearly 80 per cent of its customers who were blacked out in the storm, but efforts to get everyone back on line could be hampered by more wet, windy weather.

The weather forecast was more bad news for people still without power and other necessities.

Genice Josey made sure to fill her bulging garbage bag with a blanket now the nights are getting frigid.

"Nights are the worst because you feel like you're outside when you're inside," she said. "You shiver yourself to sleep."
Comments
Superstorm Sandy