The Conservatives, who expected a rout in the UK snap elections, see their lead cut down as election day approaches. 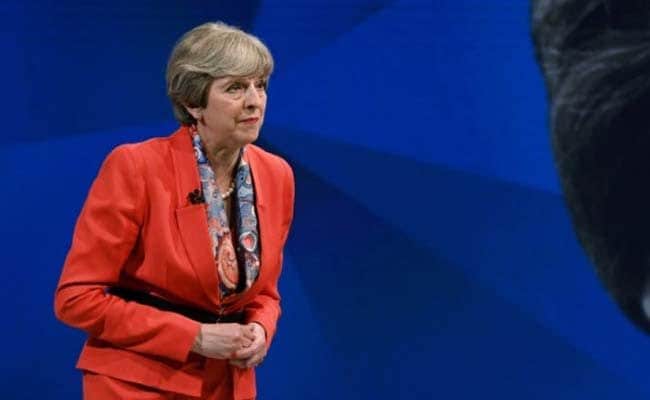 London: British Prime Minister Theresa May's once formidable lead has been eroded to a slender advantage, an opinion poll indicated on Friday as her campaign was dealt a blow when one of her candidates was charged with electoral fraud.

With less than a week before polling day on Thursday, May's Conservatives now lead the opposition Labour Party by just five percentage points, down from 15 just over two weeks ago, according to the survey from Ipsos MORI.

The poll put the Conservatives on 45 percent, down four points from a comparable survey on May 18, with Labour up 6 points to 40 percent.

"It is clear that on contact with the voters, Mrs May is not going down well and she is losing ground in particular amongst middle aged voters and female voters," Ben Page, chief executive of Ipsos MORI, told Reuters.

Page said that Labour's share of the vote included many younger voters who had not voted before.

"Even with all those young people who say they are going to vote and may not, Mrs May should still win a majority so I wouldn't sell your pounds yet," Page said.

The findings echo other recent polls which show May's once commanding lead of more than 20 points when she called the campaign being whittled away, meaning she might no longer win the landslide she hoped.

A projection by polling company YouGov on Friday even put May on track to win only 313 seats - 13 short of the 326 seats needed for a majority in parliament.

A failure to win the June 8 election with a large majority would weaken May just as formal Brexit talks are due to begin while the loss of her majority would pitch British politics into turmoil.

While sterling has weakened against the dollar as the election race tightens, it still remains about 3 cents above where it was trading at the start of the campaign on April 18.

However, in a further blow to the Conservatives on Friday, one of its candidates who beat leading Brexit figure Nigel Farage in the 2015 parliamentary election, was charged with breaking expenses rules during that campaign.

Craig Mackinlay, 50, who is standing for re-election as the member of parliament for South Thanet in southeastern England, was charged with making false claims about his spending, Britain's Crown Prosecution Service (CPS) said.

A Conservative spokesman said the allegations were "unfounded" and there needed to be an overhaul of election laws, but the timing, just six days before Britons vote, adds to the party's problems.

"The Conservative Party continues to believe that these allegations are unfounded, Craig Mackinlay is innocent until proven guilty and he remains our candidate," May told BBC television on Friday.

May, who won the top job in the political chaos following the shock June 23 Brexit vote, had hoped the election would strengthen her hand ahead of Brexit negotiations, and the party was expected to take advantage of the apparent weakness and disarray of its main rival.

However, Labour leader Corbyn, a 68-year-old socialist peace campaigner, has been pulling in big crowds at rallies across the country, brushing off warnings from opponents in his own party that he would lead them to electoral disaster.

May still ahead as best PM

The Ipsos MORI poll found May's personal ratings had fallen, although she still held a 15-point lead over Corbyn over who would make the better prime minister.

Pollsters, who universally got it wrong before the last election in 2015, showed support for May and the Conservatives falling after she was forced to backtrack on one of her most striking election pledges to make elderly people pay more for their social care, which opponents dubbed a "dementia tax".

Scotland's First Minister Nicola Sturgeon said while May was no longer certain of increasing her parliamentary majority, she added she was sceptical about suggestions the Conservatives would lose their current slim majority.

"The most likely outcome here is a Tory (Conservative) victory, but a Tory victory no longer certain of an increased majority," she told BBC radio.

She said if there was a hung parliament, her pro-independence Scottish National Party (SNP) would consider backing a minority Labour administration.

"If parliamentary arithmetic allowed it, I would want the SNP to be part of a progressive alternative to a Conservative government, not as a coalition, but on an issue by issue basis," Sturgeon said.

However, if the latest polls are wrong - and they have previously underestimated Conservative support - and May wins a sizeable victory, she will axe current finance minister Philip Hammond and replace him with interior minister Amber Rudd, the Daily Telegraph reported.

Doubts about Hammond's future have mounted since he had to reverse plans to raise payroll taxes for self-employed workers just days after presenting his first annual budget in March, while Rudd has played a highly visible role in the election.

May praised her performance when she stood in for the prime minister at a televised election debate on Wednesday featuring all Britain's main party leaders after May herself declined to attend.

"If the Prime Minister has a very big majority she will be able to do what she likes - the bigger the majority, the bigger the reshuffle," an unnamed minister was quoted by the Telegraph as saying.

Nevertheless, a spokesman for the Conservative Party dismissed the report as "rather irrelevant speculation before an election."

(Except for the headline, this story has not been edited by NDTV staff and is published from a syndicated feed.)
Comments
UK Snap ElectionsTheresa MayConservatives Partyukelection2017stories