Polar Vortex: Classes were cancelled for Wednesday and Thursday in many cities, including Chicago, home of the US third-largest school system, and police warned of the risk of accidents on icy highways. Michigan said all state offices would remain closed through Thursday. 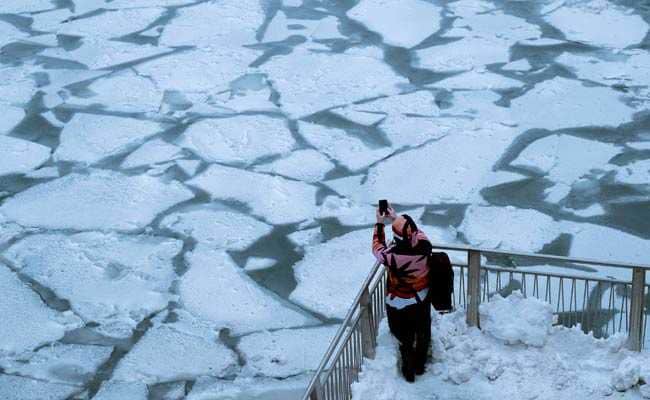 Polar Vortex: The Chicago River can be seen frozen in parts

A torrent of polar air brought record-low temperatures to much of the U.S. Midwest on Wednesday, making conditions so unbearable that trash haulers stopped making pickups and mail carriers suspended deliveries.

Classes were cancelled for Wednesday and Thursday in many cities, including Chicago, home of the nation's third-largest school system, and police warned of the risk of accidents on icy highways. Michigan said all state offices would remain closed through Thursday.

In a rare move, the U.S. Postal Service appeared to temporarily set aside its credo that "neither snow nor rain ... nor gloom of night" would stop its work: it halted deliveries from parts of the Dakotas through Ohio.

Streets in Chicago were nearly empty, with few people walking outside in the painfully cold air as temperatures hovered around minus 18 Fahrenheit (minus 28 Celsius).

"It's terrible!" Pasquale Cappellano, a 68-year-old waiter, said as he smoked a cigarette while waiting outside for a bus on the North Side of Chicago. "I gotta pick up my medication at Walgreens or else I wouldn't be out the door."

Temperatures in parts of the Northern Plains and Great Lakes plunged to as low minus 42 (minus 41 Celsius) in Park Rapids, Minnesota, and minus 31F in Fargo, North Dakota, according to the National Weather Service. The frigid winds were headed for the U.S. East Coast later on Wednesday into Thursday.

Andrew Orrison, a meteorologist with the service, said that some of the coldest wind chills were recorded in International Falls, Minnesota, at minus 55 (minus 48C). Even the South Pole in Antarctica was warmer, with an expected low of minus 24F (minus 31C) with wind chill.

Banks and stores in the region, including multiple branches of Chase and Trader Joe's, closed for business. Waste Management, a major trash collection company, said it was cancelling pick-ups in counties across the region on Wednesday and Thursday.

The bitter cold was caused by a displacement of the polar vortex, a stream of air that normally spins around the stratosphere over the North Pole, but whose current was disrupted and was now pushing south.

An Illinois police department found a fictitious cause for the icy blast, posting on Facebook that its officers had arrested Elsa, the frosty character from the Disney movie "Frozen," for bringing the arctic air to the Midwest.

The McLean Police Department shared a staged photo of officers putting a woman dressed in a blue princess gown in pink handcuffs and escorting her into a police car.

Officials opened warming centres across the region, and in Chicago, police stations were open to anyone seeking refuge from the cold. Five city buses were also deployed to serve as mobile warming centres for homeless people.

The Chicago Police Department said that at most, it could encourage people to get out of the cold. "But we will never force someone," police officer Michael Carroll said.

Hundreds of flights, more than half of those scheduled, were cancelled on Wednesday out of Chicago O'Hare and Chicago Midway international airports, according to the flight tracking site FlightAware.

Amtrak said it would cancel all trains in and out of Chicago on Wednesday.

(Except for the headline, this story has not been edited by NDTV staff and is published from a syndicated feed.)
Comments
Polar VortexUS Midwest