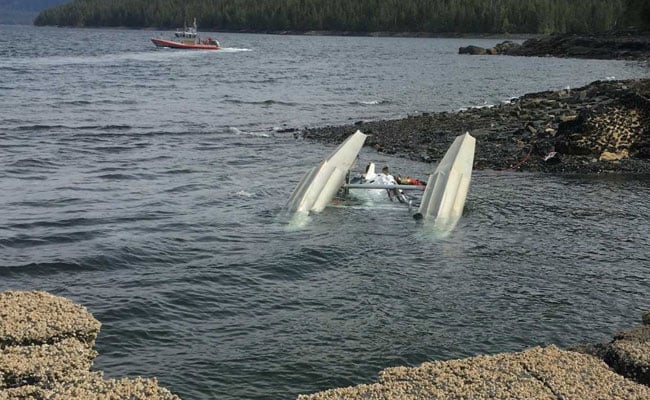 Six people died in the May 13 crash near Ketchikan, Alaska.

The surviving pilot in last week's fatal mid-air plane collision in Alaska saw a flash just before the two planes collided with a "large, loud impact," according to a National Transportation Safety Board preliminary report issued on Wednesday. Six people died in the May 13 crash near Ketchikan, Alaska. The colliding planes, a De Havilland Otter operated by Ketchikan-based Taquan Air, and a De Havilland Beaver operated by Ketchikan-based Mountain Air Service, were ferrying cruise ship passengers back from a sightseeing trip to Misty Fjords National Monument in the Tongass National Forest.

The Otter's pilot was maneuvering his plane to show passengers a waterfall when it collided with the Beaver at 3,350 feet, the NTSB report said. The pilot saw no information on his flight display about conflicting air traffic, it said.

The pilot maintained some control of the plane, which hit the water of George Inlet about five seconds after striking the Beaver, the report said. The main part of the Otter's wreckage settled about 80 feet underwater. All but one person aboard the plane were rescued, it said.

The Beaver disintegrated in the air, scattering debris on mountain slopes, on a beach and in the water, the NTSB report said. All five people aboard that plane died.

Another Taquan Air plane crashed on Monday in southeast Alaska, killing both people aboard. That plane, a Beaver, plunged into the harbor at the Native village of Metlakla, killing the pilot and an Anchorage-based epidemiologist who was headed to the village to see patients.

Taquan Air, a carrier which serves southeast Alaska communities lacking outside road access, halted operations after the second crash.
The aftermath of the crashes has been "incredibly overwhelming and we are reeling," the company said in a statement posted on its website. "We have voluntarily suspended all of our operations until further notice."

In a separate Alaska air crash, one person died when a Cessna A185F Skywagon plunged into Prince William Sound Tuesday afternoon, the U.S. Coast Guard said. Two other people were injured but survived the crash, which occurred about 20 miles southwest of Valdez, the Coast Guard said.

The NTSB said it was investigating all three Alaska air crashes.

(This story has not been edited by NDTV staff and is auto-generated from a syndicated feed.)
Comments
WorldUnited States of America