Pilot Blamed For Lagoon Crash Where Passengers Swam For Their Lives

One man died and nine other passengers were injured when the plane tried to land at an airport in Micronesia, but ended up skimming into a lagoon last year. 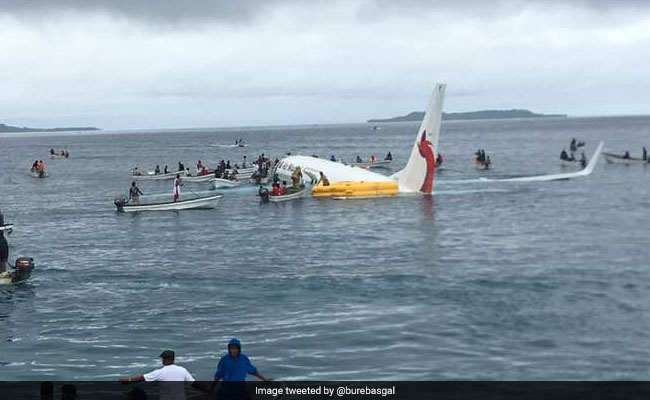 Passengers were picked up in small boats operated by locals and US Navy divers.

Pilot error led to an airliner ditching in a Pacific lagoon last year, forcing passengers and crew to swim for their lives, an official crash investigation released Thursday found.

One man died and nine other passengers were injured when the Air Niugini Boeing 737-800 attempted to land at an airport on Weno Island in Micronesia, but ended up skimming into a lagoon before sinking.

It said the pair missed "pull up" warning lights and continued the landing attempt at Chuuk International Airport, even after bad weather made them lose sight of the runway.

"Both pilots were fixated on cues associated with control inputs for the landing approach, and subsequently were not situationally aware," AIC chief commissioner Hubert Namani said.

A transcript revealed the dramatic final seconds in the cockpit before the crash.

After the crash, with the plane half-submerged in the lagoon, 12 crew members and 34 passengers scrambled off the aircraft into the water.

They were picked up by a flotilla of small boats operated by locals and US Navy divers who happened to be in the area.

The report said the man who died was not wearing a seatbelt and suffered blunt trauma injuries to his head, which probably killed him minutes after the crash.

It said Air Niugini had agreed to a number of changes, including increased training for crews flying to Chuuk and tighter restrictions on landing requirements at the airport.

(Except for the headline, this story has not been edited by NDTV staff and is published from a syndicated feed.)
Comments
plance crashes into lagoonplane crash in Pacific lagoon