The results are the latest in a series of positive data to emerge out of Israel, which has given more Covid vaccines per capita than anywhere else in the world.

Pfizer and BioNTech said they are working on a real-world analysis of data from Israel.

The Pfizer Inc. and BioNTech SE Covid-19 vaccine appeared to stop the vast majority of recipients in Israel becoming infected, providing the first real-world indication that the immunization will curb transmission of the coronavirus.

The vaccine, which is being rolled out in a national immunization program that began Dec. 20, was 89.4% effective at preventing laboratory-confirmed infections, according to a copy of a draft publication that was posted on Twitter and confirmed by a person familiar with the work. The companies worked with Israel's Health Ministry on the preliminary observational analysis, which wasn't peer-reviewed. Some scientists disputed its accuracy.

The results, also reported in Der Spiegel, are the latest in a series of positive data to emerge out of Israel, which has given more Covid vaccines per capita than anywhere else in the world. Almost half of the population has had at least one dose of vaccine. Separately, Israeli authorities on Saturday said the Pfizer-BioNTech shot was 99% effective at preventing deaths from the virus. 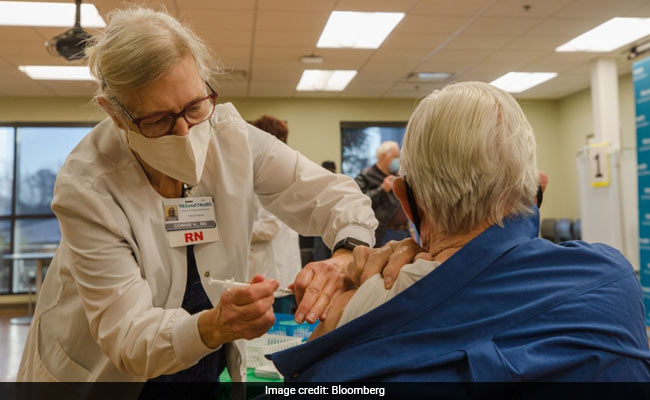 A nurse administers the Pfizer-BioNTech vaccine at the McLeod Health Clarendon hospital in South Carolina.

If confirmed, the early results on lab-tested infections are encouraging because they indicate the vaccine may also prevent asymptomatic carriers from spreading the virus that causes Covid-19. That's not been clear because the clinical trials that tested the safety and efficacy of vaccines focused on the ability to stop symptomatic infections.

"These are the data we need to see to estimate the potential for achieving herd immunity with vaccines," said Raina MacIntyre, professor of biosecurity at the University of New South Wales in Sydney, in an email Monday. "However, we do need to be able to see the data published in a peer-reviewed journal and to be able to scrutinize the data in detail."

Pfizer and BioNTech said they are working on a real-world analysis of data from Israel, which will be shared as soon as it's complete. Spokespeople declined to comment on unpublished data.

The study wasn't designed to accurately measure a reduction in transmission of SARS-CoV-2 because it used national testing data without accounting for differences in testing rates between vaccinated and unvaccinated people, said Zoe McLaren, an associate professor in the school of public policy at the University of Maryland Baltimore County.

"The main result overstates the reduction in transmission from the Pfizer vaccine," McLaren said in an email.

The study compares the number of reported cases between those who had been fully vaccinated and those who hadn't been vaccinated, but vaccinated people are less likely to get tested so the data will undercount cases, especially asymptomatic cases, in this group, she said.

"That means that the true reduction in transmission is lower than the estimate of 89.4%," McLaren said. "How much lower? We need more evidence to know for sure. But I expect that, once we account for the bias, we'll still find that this vaccine does reduce transmission. And that would be very good news."

About 80% of SARS-CoV-2 cases in Israel during the time period of the study, from Jan. 17 to Feb. 6, were caused by the more transmissible strain first identified in the U.K. Israel's vaccination drive began just before the so-called B.1.1.7 variant emerged, fueling infections and leading to a third lockdown on Jan. 8.

Through Feb. 6, about 27% of people aged 15 and older in Israel were fully vaccinated, with the Pfizer-BioNTech shot the only vaccine available in the country at the time. People were considered fully vaccinated and included in the analysis if the data collected were more than seven days after they received their second dose.

Based on SARS-CoV-2's infectiousness, a vaccine that is 89% effective at preventing infection is likely to be effective at eliminating Covid-19 in a population in which high vaccination coverage is achieved, said Helen Petousis-Harris, a vaccinologist at the University of Auckland.

Elimination of Covid-19 will depend on potential "reservoirs" of SARS-CoV-2 in animals, genetic changes in the virus that might enable it to escape vaccine-induced immunity, and the ability to stop transmission across the world, said Petousis-Harris, who is co-leader of the Global Vaccine Data Network, a multinational group that collaborates on vaccine safety studies.