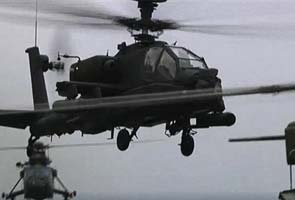 Incirlik Air Base, Turkey: The Pentagon says it will send Patriot air defense missiles and 400 troops to Turkey as part of a NATO force meant to protect Turkish territory from potential Syrian missile attack.

The order calls for 400 U.S. soldiers to operate two batteries of Patriots at undisclosed locations in Turkey, Little told reporters flying with Panetta.

Turkey is a founding member of NATO and requested that the alliance provide Patriots. They will be sent by NATO members Germany and the Netherlands as well as the U.S. for an undetermined period.

During a brief stop at Incirlik Air Base, Panetta told U.S. troops that Turkey might need the Patriots, which are capable of shooting down shorter-range ballistic missiles as well as aircraft.

He said he approved the deployment "so that we can help Turkey have the kind of missile defense it may very well need to deal with the threats coming out of Syria," he said.

Panetta did not mention how soon the two Patriot batteries will head to Turkey or how long they might stay.
Incirlik is about 60 miles from the Syrian border.