The deal struck at a global conference in the heart of Polish coal country, where some 25,000 delegates had gathered, adds legal flesh to the bones of the 2015 Paris agreement. 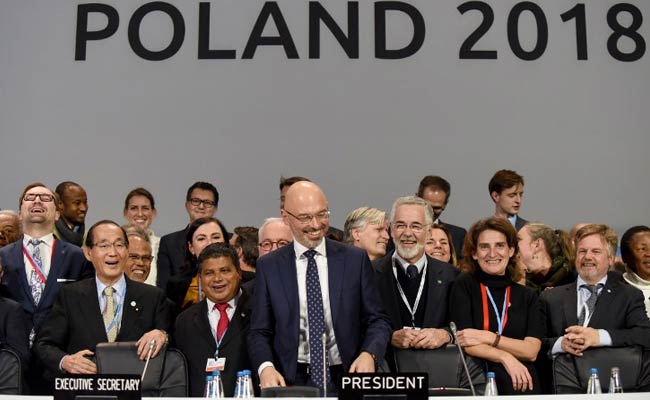 Heads of the delegations at the end of the final session of the COP24 summit on climate change. (AFP)

Weary climate negotiators limped across the finish line Saturday after days of round-the-clock talks, striking a deal that keeps the world moving forward with plans to curb carbon emissions. But the agreement fell well short of the breakthrough that scientists - and many of the conference's own participants - say is needed to avoid the cataclysmic impacts of a warming planet.

The deal struck Saturday at a global conference in the heart of Polish coal country, where some 25,000 delegates had gathered, adds legal flesh to the bones of the 2015 Paris agreement, setting the rules of the road for how nearly 200 countries cut their production of greenhouse gases and monitor each other's progress.

The agreement also prods countries to step up their ambition in fighting climate change, a recognition of the fact that the world's efforts have not gone nearly far enough. But, like the landmark 2015 agreement in Paris, it does not bind countries to hit their targets. And observers questioned whether it was sufficient given the extraordinary stakes.

"We are driven by our sense of humanity and commitment to the well being of the earth that sustains us and those generations that will replace us," Michal Kurtyka, the Polish environmental official who provided over the two-week international summit, said late Saturday as the marathon talks drew to a close.

Kurtyka noted the difficulty of finding global consensus on issues so technical and, in many ways, politically fraught. "Under thee circumstances, every single step forward is a big achievement," he said. "And through this package, you have made 1,000 little steps forward together."

But even as he spoke, the outcome raised immediate questions about whether those steps were large enough.

"In the climate emergency we're in, slow success is no success," said Durwood Zaelke, president of the Institute for Governance and Sustainable Development. "In an emergency, if the ambulance doesn't get you to the hospital in time, you die. If the firetruck doesn't get to your house in time, it burns down."

Negotiators said the agreement was the best that could have been expected given the limited agenda for the talks and the need for a global consensus. Virtually every nation on Earth was represented at Katowice, ranging from small island countries that threaten to be swallowed by rising seas - and that pushed for a crisis-level response - to the United States, which has said it plans to withdraw from the Paris process. 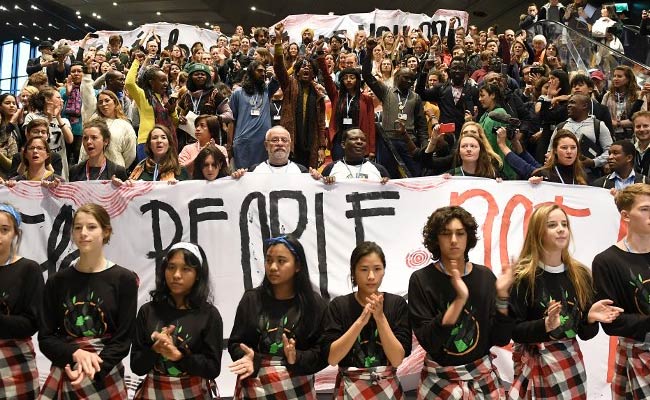 Members of the Global Campaign to Demand Climate Justice protest ahead of the final session of the COP24 summit on climate change in Katowice. (AFP)

The United States, the world's largest economy and its second-largest polluter, remains in the agreement until at least 2020. It played an at-times contentious role in the negotiations, with its officials rankling fellow delegates by initially refusing to accept a landmark climate report and later putting on a presentation touting the virtues of fossil fuels.

But fellow negotiators said it was mostly notable for its absence.

"The US was the driving force in the run-up to Paris. Once they decide to no longer be a part of the agreement, they can't be a driver," said Jochen Flasbarth, a top German delegate.

Flasbarth said the minimized US role was particularly apparent in negotiations with China, which did not feel as much pressure to ramp up its ambition in fighting climate change as it otherwise might have because the United States was not applying it. China is the world's largest producer of greenhouse gases.

"The US role here is somewhat schizophrenic - pushing coal and dissing science on the one hand, but also working hard in the room for strong transparency rules," said Elliot Diringer, executive vice president of the Center for Climate and Energy Solutions, a Virginia-based nonprofit group. "Over the long haul, making the agreement operational will do more to strengthen climate ambition that any immediate political signals."

In another sign of a more difficult environment for climate negotiations this year, text establishing a large part of a planned carbon trading system was scuttled after Brazil, one of the world's leading greenhouse gas producers, blocked proposals for counting certain emissions.

Brazil led a push for lenient rules that other nations said would weaken the system, which is intended to incentivize emissions cuts by creating a market price. With negotiators unable to reach a deal, the issue was punted until next year - a move that Boston College environmental law professor David Wirth said could "delay or undermine confidence among the private sector in undertaking climate-friendly investments - one of the most important purposes of the Paris Rulebook."

This year's conference - an annual UN-sponsored exercise now in its 24th year - came against the backdrop of a series of increasingly dire assessments by scientists.

Specifically, an October report from the UN's Intergovernmental Panel on Climate Change warned that the world was far off-track in its efforts to avoid the most catastrophic impacts from warming temperatures. It concluded that a "rapid and far-reaching" transformation of the world's energy, transportation and other sectors will be necessary over the next dozen years to avoid warming the globe more than 1.5 degree Celsius (2.7 degrees Fahrenheit) above preindustrial levels.

But rather than lighting a fire under the world to move with more urgency, the report became a source of political friction during the talks in Poland.

Early in the summit, the Trump administration joined Saudi Arabia, Russia and Kuwait in blocking official acceptance of the report's findings, arguing that any agreement should merely "note" its existence rather than "welcome" its warnings.

The semantic fight encapsulated the shift of the United States under President Donald Trump from a country pushing fellow countries to act more aggressively to one that refuses to acknowledge the conclusion of the world's top scientists.

A chorus of activists and diplomats and national delegates - none more vocal than a coalition of small island states already feeling the impact of rising seas - had implored leaders of the summit to recognize the content of the IPCC report. The issue continued to be debated into the conference's closing hours, along with a bevy of more technical disagreements.

The conference was scheduled to end Friday, but repeated deadlines for closing out the talks came and went, with negotiators haggling through the night and through Saturday. By then, some negotiators had nearly lost their voices. Bleary-eyed journalists slept on chairs or FaceTimed with their loved ones from afar. U.N. staffers, security officials and the rest of the dwindling crowd at the cavernous conference center - built on the site of a former coal waste dump - speculated over when the talks would finally reach their end.

The once-busy pavilions - which once pulsated with a seemingly endless stream of lectures and demonstrations of new technologies - were being broken apart. A group of Pacific Islanders sat in a small circle, playing a guitar and drums. A group of Austrians seemed determined to clear out any remaining wine, beer and sweets in their corner of the conference center, and to invite passersby to join in.

After two weeks under the cold, unremittingly gray skies of a December in Poland, negotiators are due to meet in the sun and warmth of Santiago, Chile, next winter. In between, the UN is hosting a climate summit next September that observers say now takes on crucial importance as a measure of whether countries are serious about upping their ambition.

Manuel Pulgar-Vidal, who led a previous round of UN climate talks and is now leader of the World Wildlife Fund's global climate and energy practice, said world leaders will need to come through in New York on the promises they have made in Katowice.

"Anything less," he said, "is a failure in political and moral leadership."