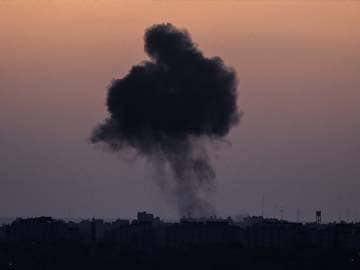 A picture taken on July 13, 2014 from the southern Israeli city of Sderot shows smoke billowing from buildings following an Israeli air strike in Gaza City.

Paris: French authorities are forbidding pro-Palestinian protests in some cities after violence marred a recent march against the disturbances in Gaza, as Jewish-Muslim tensions in France have reached their highest level in years.

Moderates on both sides called yesterday for calm, and for a halt to fighting in the Mideast. France has Western Europe's largest Muslim and Jewish populations, and Israeli-Palestinian unrest often translates into anger between the two communities.

After several thousand pro-Palestinian demonstrators marched peacefully Sunday through Paris, clashes broke out among small groups, including some who attacked synagogues, Jewish stores and neighbourhoods.

Militants from the Jewish Defence League were also involved in violence against pro-Palestinian demonstrators, according to Roger Cukierman, head of France's leading Jewish organisation, CRIF.

Speaking yesterday to the Associated Press, he denounced the league's violent methods and lamented that its actions on Sunday, including provoking pro-Palestinian protesters, could further inflame anger.

Several demonstrations have been held in recent days calling for an end to Israeli airstrikes on Gaza.

A march was planned for Paris on Saturday. A police official said yesterday said it would be banned because of "the serious risk of disruption of public order that such a protest could engender, in a context of heightened tension."

The official, who wasn't authorised to be publicly named, spoke on condition of anonymity. Authorities have also banned protests in Nice and Lille.

The French government is pushing for a cease-fire in Gaza and to calm tensions at home.

The French authorities are also struggling to stem the flow of young Muslim radicals, facing dim job prospects and discrimination in France, from heading to Syria to fight with extremists. Meanwhile French Jews are emigrating in record numbers for Israel.

"The Jewish population is worried because they are finding themselves cornered on the one hand by the right, the extreme right, which is gaining electoral support, and is still anti-Semitic in its ideology and in its ranks, and on the other hand, by pro-Palestinian forces, by the extreme left, by disaffected youth from suburban housing projects, and by the Muslim population in general," renowned Nazi hunter Serge Klarsfeld said yesterday at a memorial service in remembrance of Jews deported during World War II.

Promoted
Listen to the latest songs, only on JioSaavn.com
"History tells us that when there is an anti-Jewish movement we cannot control, the best thing to do is to move to another country," he said.

Cukierman described the current tensions as the worst in decades.