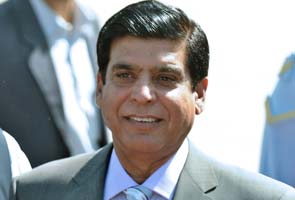 The court gave Prime Minister Raja Pervez Ashraf until November 14 to submit the request, threatening to charge him with contempt of court or face disqualification if he did not comply.

The case has fuelled tensions in a long-running standoff between the government and the judiciary. Ashraf's predecessor, Yusuf Raza Gilani, was declared in contempt of court in June over the same issue and disqualified from holding the post of prime minister.

If Ashraf is disqualified, the ruling Pakistan People's Party can simply nominate a new prime minister since it has a comfortable majority in parliament.

But any prolonged political instability would further distract an unpopular government which has failed to tackle a wide range of issues, from a Taliban insurgency to crippling power cuts.

Thousands of corruption cases were thrown out in 2007 by an amnesty law passed under former military president Pervez Musharraf, paving the way for a return to civilian rule.

"Now the ball is in the Swiss court and it's up to Swiss authorities if they want to immediately re-open the cases, or simply bury the case altogether," said Babar Sattar, a legal commentator.

Swiss authorities said that in 2008 the Pakistani government dropped all related cases it had initiated in Switzerland after Bhutto's party won an election and Zardari become president.