The year 2019 marks the 550th birth anniversary year of Sikhism founder Guru Nanak Dev, whose birthplace was Sri Nankana Sahib, which is now in Pakistan. 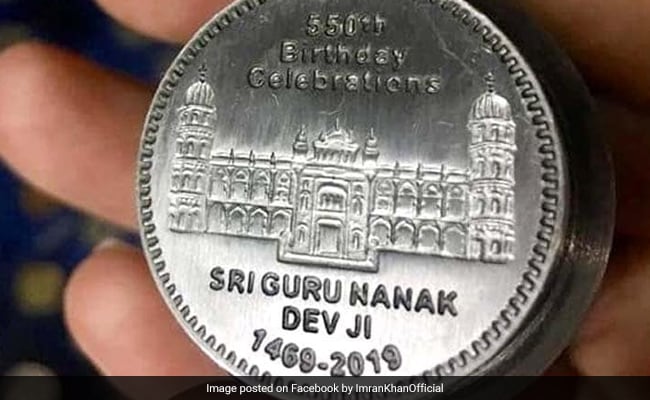 "Pakistan issues commemorative coin to mark the 550th anniversary of Guru Nanak Devji," Mr Khan said in the post. The coin comes ahead of the inauguration of the Kartarpur corridor by Mr Khan on November 9.

The year 2019 marks the 550th birth anniversary year of Sikhism founder Guru Nanak Dev, whose birthplace was Sri Nankana Sahib, which is now in Pakistan.

Last November, both India and Pakistan agreed to set up the Kartarpur corridor to link the historic Gurdwara Darbar Sahib - the final resting place of Guru Nanak - in Pakistani town of Kartarpur with Dera Baba Nanak in Punjab's Gurdaspur district.

Pakistan has set up 80 immigration counters at the Kartarpur Corridor to speed up the clearance process of the large number of pilgrims who are expected to visit the holy shrine.

India and Pakistan last week signed the agreement on the Kartarpur Corridor that will allow Indian pilgrims to undertake visa-free visit to Gurdwara Darbar Sahib, the shrine of the Sikh religion's founder Guru Nanak Dev in Pakistan.