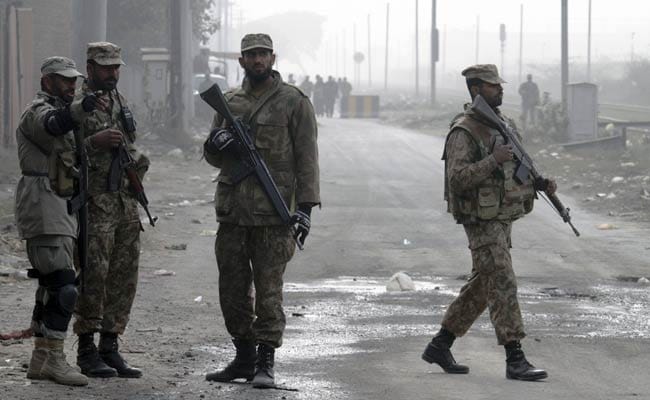 Pakistan Army troops stand guard at a road leading to the central prison on the outskirts of Lahore. (Associated Press)

Faisalabad: Four Pakistani terror convicts on death row were executed at a jail in Faisalabad today, after the government ended a moratorium on the death penalty earlier this week. (Pakistan: 59 Militants Killed After School Massacre)

The executions were carried out in a district jail in Faisalabad after strict security measures were put in place.

The government ended the six-year ban on capital punishment for terror-related cases following a brutal terror attack on a school in Peshawar on Tuesday that killed 149 people, mostly children. (Pakistan Executes Two Terrorists After Lifting Moratorium on Death Penalty)

On Friday, two convicted terrorists - Aqil alias Doctor Usman and Arshad Mehmood - had been executed at the Faisalabad jail in Pakistan's Punjab province.

Aqil, who uses the name Doctor Usman, was convicted for an attack on the army headquarters in Rawalpindi in 2009. Arshad Mehmood was convicted for his involvement in a 2003 assassination attempt on former president General Pervez Musharraf. (Pakistan Army Chief Signs Death Warrants for Six Militants)

Promoted
Listen to the latest songs, only on JioSaavn.com
On Thursday, Pakistan's military chief signed death warrants for six terrorists on death row after the government ended the death penalty moratorium on Wednesday.

Pakistan's decision to relinquish a ban on the death penalty in terror-related cases came as the country's political and military leaders vowed to wipe out the homegrown Islamist insurgency following the attack on the army school. (#PakWithIndiaNotoLakhviBail: A Cross-Border Show of 'Hashtag Solidarity')