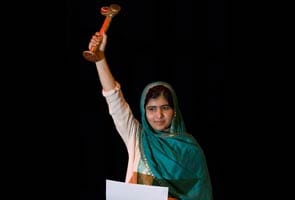 Cambridge: Malala Yousafzai, a Pakistani girl who survived an assassination attempt by the Taliban is being honoured as Harvard University's humanitarian of the year.

The 16-year-old is an outspoken proponent for girls' education. She was at Harvard yesterday to accept the 2013 Peter J Gomes Humanitarian Award.

Harvard President Drew Gilpin Faust said she was pleased to welcome Malala because of their shared interest in education.

Malala said she was hoping to become a politician because they can have an influence on a broad scale.

She spoke nostalgically about her home region, the Swat Valley. She said she hopes to return someday.

Malala was shot in the head last October.

Promoted
Listen to the latest songs, only on JioSaavn.com
Militants said she was attacked because she was critical of the Taliban, not because of her views on education.