A video of blind student Ebenezer Azamati being dragged from his seat sparked fury in Britain. 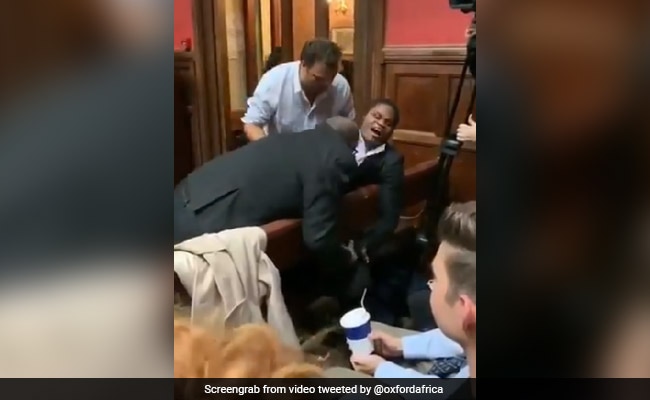 Ebenezer Azamati had arrived at the debate early to secure a seat ahead of the discussion.

The president of the prestigious Oxford Union resigned Tuesday after weeks of mounting pressure following the ill-treatment of a blind Ghanaian postgraduate student who was forcefully evicted by security personnel during a crowded debate in October.

Ebenezer Azamati, 25, had arrived at the debate early to secure a seat ahead of the discussion due to concerns about accessibility for people who are visually impaired. When he returned to the chamber after having something to eat, Azamati was confronted by staff who allegedly told him that the room was full. Video footage of the incident shows a visibly distressed Azamati clinging to the bench as two men aggressively attempt to remove him from the chamber. In one hand, he clutches his membership card while crying: "I'm not leaving."

"Doesn't he have rights to the chamber like everyone else? Isn't he supposed to be given consideration due to his disability? Why did everyone carry on with their business like nothing was happening?" Oxford University's Africa Society tweeted before swiftly launching a campaign to defend Azamati.

The Oxford Union is a nearly two-century-old independent debating society whose members are drawn mainly from the University of Oxford in England.

A member of the union who witnessed the Oct. 17 event told the Oxford Student newspaper that staff were "unnecessarily violent" in their treatment of Azamati. "Very quickly the security guards were physically restraining him without any consideration of the fact that he could not see," she said. Another student, Henry Hatwell, told an appeal hearing over the weekend that security personnel had dragged Azamati from the chamber "by his ankles."

"I felt that I was treated as not being human enough to deserve justice and fair treatment," Azamati told the Sunday Times after the incident.

But for Azamati, the ordeal was far from over.

After his ejection from the chamber, a disciplinary hearing was called by Oxford Union President Brendan McGrath. A complaint was filed against Azamati accusing him of violent misconduct, and his membership was suspended. That prompted fresh backlash, and more than 50,000 people signed a petition that called for a public apology, reinstatement of Azamati's Oxford Union membership and McGrath's resignation as president of the union.

In a statement published Monday, the Oxford Union said it had reviewed new evidence and heard witness testimony that proved Azamati was "not guilty in respect of any of the charges brought by the president." The union also said it had reinstated Azamati's membership.

On Tuesday evening, McGrath took to the Oxford Union's Facebook page to "apologize profusely" and announce his resignation. His departure was welcomed by many, including the Oxford Africa Society, which had backed Azamati and called his treatment "unjust, inhumane, and shameful."

Reflecting on his handling of the incident, McGrath said he was brought the disciplinary complaint against Azamati at the request of Oxford Union staff and felt it was his duty to represent them. "The right response would not have begun with prosecution and apportioning blame; it would have addressed immediately the extreme distress of all involved, and pursued constructive solutions to the institutional problems highlighted," he said.

The expulsion of Azamati and the way he was treated after the incident sparked outrage across Britain, on social media and among students at the renowned university. They questioned how students of color are treated at a predominantly white university that has recently vowed to do more to tackle its lack of diversity.

"So very sad to read about the way blind, black student Ebenezer Azamati was manhandled by @OxfordUnion. The indignity suffered is beyond comprehension. He deserves far more than an apology," tweeted British lawmaker David Lammy on Sunday.

"The University of Oxford's poor track record in improving access for black students - which has been well documented - and the exclusivity of the union and its atmosphere, have combined to create anything but a democratic space in which student voices of all backgrounds can thrive," wrote Guardian columnist Afua Hirsch on Tuesday, in a piece entitled: "The manhandling of a blind man shows the Oxford Union still has a race problem."

The Oxford Union is independent of the university and has hosted debates since 1823. No stranger to controversy, it has drawn criticism in the past over its hosting of divisive speakers from Britain and overseas. In 2007, the union faced a sit-down protest after welcoming far-right British politician Nick Griffin and Holocaust denier David Irving into its famous debate chamber.

In November 2018, a visit from a former top aide to President Donald Trump, Stephen Bannon, prompted a fresh wave of backlash, with protesters gathering to condemn his presence. "This is not the first time that students have been forced to tell the Union that neither their values nor those of their speakers are acceptable . . . and we don't believe that it will be the last," protesters said in a statement at the time.