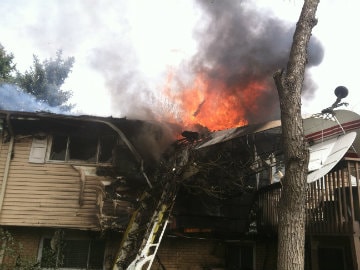 Representational Image: This photo provided by North Metro Fire Rescue District, a house is on fire after a plane crash on Monday, May 5, 2014 Northglenn, Colo

Arizona, United States: Authorities say a small plane carrying French tourists crashed while trying to land at an airport in Arizona, and one person was killed and another hospitalised.

Page Police Capt. Ray Varner says the single-engine plane was carrying seven people when it hit the ground and flipped in windy conditions Saturday afternoon near the airport runway.

Varner says one passenger died after being rushed to a hospital, while another was hospitalized in apparent stable condition.

Four others received hospital treatment for minor injuries and were released, while the seventh person was unhurt.

Promoted
Listen to the latest songs, only on JioSaavn.com
Varner says cause of the crash is being investigated.