The president says there are plenty of highly intelligent non-"believers" like him. 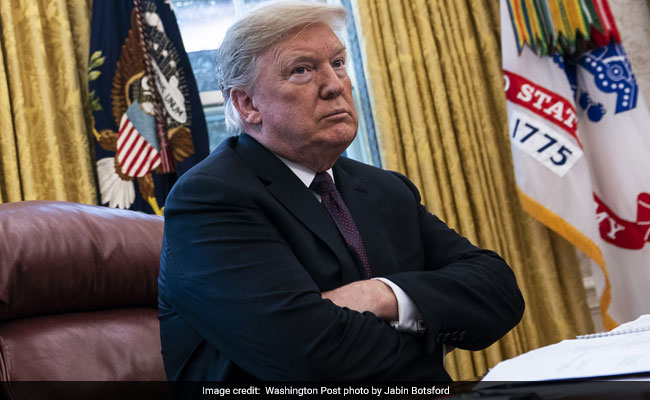 President Donald Trump on Tuesday dismissed a landmark report compiled by 13 federal agencies detailing how damage from global warming is intensifying throughout the country, saying he is not among the "believers" who see climate change as a pressing problem.

The comments marked the president's most extensive yet on why he disagrees with his own government's analysis, which found that climate change poses a severe threat to the health of Americans, as well as to the country's infrastructure, economy and natural resources. The findings - unequivocal, urgent and alarming - are at odds with the Trump administration's rollback of environmental regulations and absence of any climate action policy.

"One of the problems that a lot of people like myself, we have very high levels of intelligence but we're not necessarily such believers," Trump said during a freewheeling 20-minute Oval Office interview with The Washington Post in which he was asked why he was skeptical of the dire National Climate Assessment his administration released Friday.

Trump did not address the fundamental cause of climate change. The president riffed on pollution in other parts of the world. He talked about trash in the oceans. He opined on forest management practices. But he said little about what scientists say is actually driving the warming of the planet - emissions of carbon dioxide from the burning of fossil fuels.

"You look at our air and our water and it's right now at a record clean. But when you look at China and you look at parts of Asia and you look at South America, and when you look at many other places in this world, including Russia, including many other places, the air is incredibly dirty, and when you're talking about an atmosphere, oceans are very small," Trump said in an apparent reference to pollution around the globe. "And it blows over and it sails over. I mean we take thousands of tons of garbage off our beaches all the time that comes over from Asia. It just flows right down the Pacific. It flows and we say, 'Where does this come from?' And it takes many people, to start off with."

Katharine Hayhoe, a climate scientist at Texas Tech University, said in an email Tuesday that the president's comments risk leaving the nation vulnerable to the ever-growing impacts of a warming planet.

"Facts aren't something we need to believe to make them true - we treat them as optional at our peril," Hayhoe said. "And if we're the president of the United States, we do so at the peril of not just ourselves but the hundreds of millions of people we're responsible for."

Andrew Dessler, a professor of atmospheric sciences at Texas A&M University, struggled to find a response to the president's comments.

"How can one possibly respond to this?" Dessler said when reached by email, calling the president's comments "idiotic" and saying Trump's main motivation seemed to be attacking the environmental policies of the Obama administration and criticizing political adversaries.

In his comments, Trump also seemed to invoke a theme that is common in the world of climate-change skepticism - the idea that not so long ago, scientists feared global cooling, rather than the warming that is underway today.

"If you go back and if you look at articles, they talk about global freezing," Trump said. "They talk about at some point, the planet is going to freeze to death, then it's going to die of heat exhaustion."

This may refer to an oft-cited 1975 Newsweek article titled "The Cooling World" or a 1974 Time magazine story titled "Another Ice Age?" But researchers who have reviewed this period have found that while such ideas were indeed afoot at the time, there was "no scientific consensus in the 1970s" about a global cooling trend or risk, as there is today about human-caused climate change.

In other words, scientists' understanding of where the planet is headed, and the consequences, is far more developed now than it was in the 1970s.

At present, Earth has warmed roughly one degree Celsius (1.8 degrees Fahrenheit) above late-19th-century, preindustrial levels. Multiple analyses have shown that without rapid emissions cuts - well beyond what the world is undertaking - the warming will continue and could blow past key thresholds that scientists say could lead to irrevocable climate-related catastrophes, such as more-extreme weather, the death of coral reefs and losses of major parts of planetary ice sheets.

On Tuesday, a U.N. report underscored again how the world is far off course on its promises to cut greenhouse-gas emissions. The report found that, with global emissions still increasing as of 2017, it is unlikely they will peak by 2020. Scientists have said that carbon emissions must fall sharply in coming years if the world is to have a chance of avoiding the worst consequences of climate change.

Trump also made reference to recent devastating wildfires in California, which scientists say have been made more intense and deadly by climate change. But the president instead focused on how the forests that burned have been managed. Previously, he has praised Finland for spending "a lot of time on raking and cleaning" its forest floors - a notion that left the Finnish president flummoxed.

"The fire in California, where I was, if you looked at the floor, the floor of the fire, they have trees that were fallen," Trump said. "They did no forest management, no forest maintenance, and you can light - you can take a match like this and light a tree trunk when that thing is laying there for more than 14 or 15 months. And it's a massive problem in California."

"You go to other places where they have denser trees, it's more dense, where the trees are more flammable, they don't have forest fires like this because they maintain," he said. "And it was very interesting I was watching the firemen, and they were raking brush. . . . It's on fire. They're raking it, working so hard. If that was raked in the beginning, there would be nothing to catch on fire."

Trump wasn't the only administration official on Tuesday to continue shrugging off the federal government's latest climate warnings. In a television appearance in California, Interior Secretary Ryan Zinke acknowledged that fire seasons have grown longer in the state but added, "Climate change or not, it doesn't relieve you of responsibility to manage the forest."

"We think that this is the most extreme version and it's not based on facts," Sanders said of the National Climate Assessment. "It's not data-driven. We'd like to see something that is more data-driven. It's based on modeling, which is extremely hard to do when you're talking about the climate. Again, our focus is on making sure we have the safest, cleanest air and water."

(Except for the headline, this story has not been edited by NDTV staff and is published from a syndicated feed.)
Comments
Donald TrumpClimate changeNational Climate Assessment