It has been five years since North Korea last held the last Mass Games, but this year's version is set to begin Sunday. 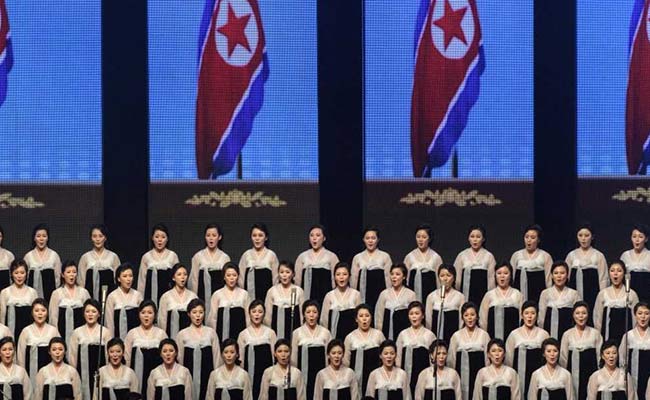 From a distance, the mosaic-like screen of shifting colors almost appears to be electronic, lighting up a North Korean stadium like a huge TV. But on closer look, it's not a screen at all: It's thousands of people holding up colored placards, shifting them in synchrony to create the effect of a moving image.

The participants in the background are mainly students, and they practiced for many months, if not longer, to put together their part of a huge North Korean spectacle known as the Mass Games - a gathering that includes over-the-top gymnastics and dance performances, and proclamations of loyalty to the isolated country's leader.

It has been five years since North Korea last held the last Mass Games, but this year's version is set to begin on Sunday. It will be part of North Korea's 70th anniversary celebrations, and the theme is "The Glorious Country."

Other events planned for the anniversary include a military parade, which may include the showing-off of equipment. The BBC reported that tens of thousands of people are expected to march in the parade, after much intense practice. And anniversary celebrations are expected to last about a month.

The games aren't so much games as they are a 90-minute gymnastics or dance performance. More than 100,000 people have participated in past games, and in 2007, Guinness World Records said they took the cake as the largest gymnastics display in the world with 100,090 participants.

On tour company Koryo Group's website, the games are described as "an art form in North Korea, developed over decades, which can involve up to 100,000 performers in massive synchronized displays of gymnastics and dance."

The Washington Post's Adam Taylor wrote in August that satellite imagery suggested that Pyongyang was planning something huge for September. As it prepared for the celebrations, the government reportedly stopped issuing tourist visas, and North Korean authorities blocked Chinese tour groups from visiting, saying all the hotels in the capital were being renovated.

Radio Free Asia reported that the government was also cracking down on "nonsocialist" behavior, policing haircuts that were deemed to not be a good match for socialism.

There had initially been speculation that Chinese President Xi Jinping would attend this year's games, but China is sending its third-ranking party official instead. A Syrian delegation arrived this week and South Korean President Moon Jae-in will visit Pyongyang later this month, The Associated Press reported.

Neither Russian President Vladimir Putin nor President Donald Trump are expected to be in attendance. The American government currently bans US citizens from visiting North Korea.

Past attendees have included former secretary of state Madeleine Albright, who on a 2000 visit to Pyongyang, met with then-North Korean leader Kim Jong Il, who brought her along to the games.

The Post reported at the time that "choreographed as it may have been, it was a stunning display of fervor that evoked chilling reminders of the mass rallies of the Third Reich. At the end of the performance - which had a strident, militaristic theme - the cast of thousands broke into a frenzied chant: 'We shall defend our Dear Leader.'"

ABC News reported that Kim Jong Il once said that the games were a crucial part of children's training as communists.

"The schoolchildren, conscious that a single slip in their action may spoil their mass gymnastic performance, make every effort to subordinate all their thoughts and actions to the collective," he reportedly said.

(Except for the headline, this story has not been edited by NDTV staff and is published from a syndicated feed.)
Comments
North Korea Mass GamesNorth Korea's 70th anniversary celebrationsKim Jong Un