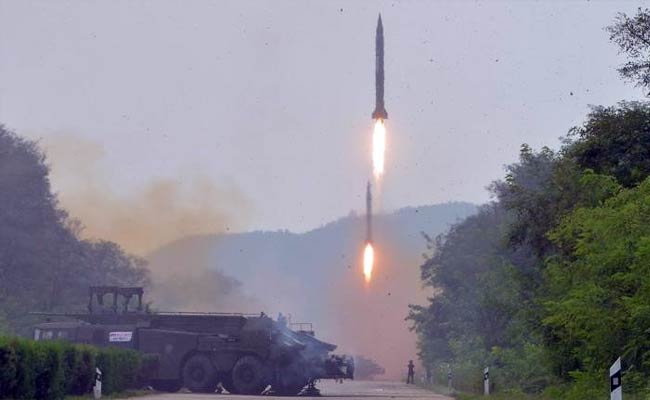 The North's leader Kim Jong-Un oversaw the "successful" test of the powerful new rocket engine, state media said Sunday, in a move apparently timed to coincide with a trip to Asia by new US Secretary State Rex Tillerson.

It was the latest in a series of moves by Pyongyang, which have recently included the firing of four missiles to its east in what it described as practice for an attack on US army bases in Japan.

"The latest test is believed to have made some meaningful progress in engine functions," Seoul's defence ministry spokesman told reporters.

"But we need more analysis on its exact propulsive power and applicable use," said Lee Jin-Woo.

The North's last ground test of a high-powered rocket engine -- which can be used in missiles -- was in September last year, and also observed by Kim.

The weekend's experiment came as the top US diplomat wrapped up his trip to Tokyo, Seoul and Beijing, having declared Washington would drop the "failed" approach of "strategic patience" with Pyongyang.

In Seoul, Tillerson also warned that US military action against Pyongyang was possible -- a sharp divergence from China's insistence on a diplomatic approach to its neighbour, which it has long protected.

The impoverished, isolated North insists that it needs nuclear and missile weapons for self-defence against "hostile forces", including the US and its ally South Korea.

It has conducted five nuclear tests since 2006 -- three under Kim Jong-Un -- and launched a number of missiles as it seeks to develop a weapon capable of reaching the US mainland.

Expert opinions vary on how advanced the North's missile capabilities are, but most agree it has made significant progress in recent years.

A growing threat from the North has prompted Seoul and Washington to begin installing a powerful US missile defence system in the South -- angering Beijing, which views it as a threat to China's own missile capabilities.

Promoted
Listen to the latest songs, only on JioSaavn.com
The deployment of Terminal High Altitude Area Defense (THAAD) has prompted angry protests in China and boycotts of South Korean businesses, and further strained ties between Beijing and Washington.

(Except for the headline, this story has not been edited by NDTV staff and is published from a syndicated feed.)
Comments
North KoreaNorth Korea nuclear testsNorth Korea rocket engine testKim Jong-Un