NK News said citizens were seen late in the evening preparing for the parade near Pyongyang's Kim Il Sung Square. 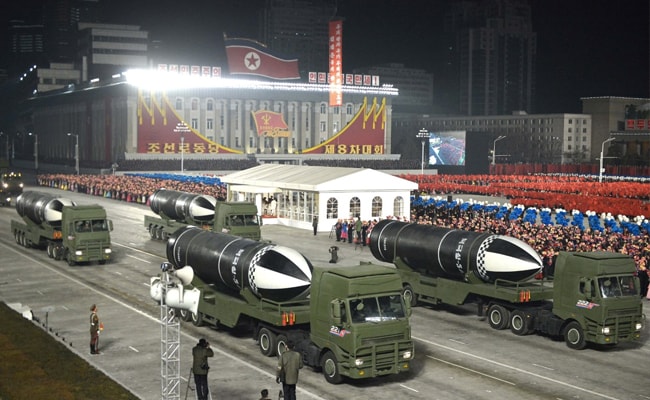 A report said the North Korean parade appeared to have taken place in Pyongyang. (Representational)

North Korea appears to have staged a night-time military parade of a type it has used in the past to unveil new military hardware including large ballistic missiles, South Korean and other media focused on the country reported on Thursday.

South Korea's Yonhap news agency said the parade appeared to have taken place in Pyongyang on Sept. 9, while the specialist NK News online publication quoted multiple informed sources as saying a parade had been due to start at midnight local time. Sept. 9 is North Korea's national day.

In a tweet, NK News said citizens were seen late in the evening preparing for the parade near Pyongyang's Kim Il Sung Square. It said roads were closed and no regular vehicles seen.

Yonhap quoted an unnamed military source as saying: "There have been signs that the North carried out a military parade in Pyongyang after midnight. The (South Korean) military is analyzing those signs."

Last week, NK News and 38 North, another organization that tracks events in secretive North Korea, said troops had been spotted in commercial satellite imagery preparing for a likely military parade.

Another night-time military parade was held in January.

Talks aimed at persuading North Korea to give up its nuclear weapons and ballistic missile arsenals have stalled in recent years. U.S. President Joe Biden's administration has said it will explore diplomacy to achieve North Korean denuclearization, but has shown no willingness to meet North Korean demands for an easing of sanctions.