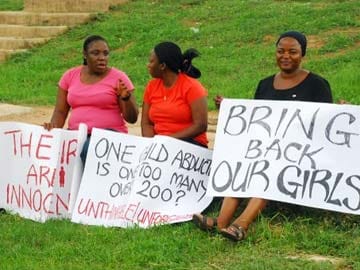 Nigeria women and mothers of the kidnapped girls of Chibok stage a sit-in after a march calling for their freedom in Abuja on April 30, 2014

Abuja: Nigerian President Goodluck Jonathan on Sunday ordered a stepped-up drive to free 223 schoolgirls whose abduction by suspected Islamists has ignited a global outcry, as two girls who escaped told of their dead-of-night ordeal.

Jonathan has come under mounting pressure since gunmen believed to be Boko Haram extremists stormed the girls' boarding school on April 14, forcing them from their dormitories onto trucks and driving them into the bush.

Anger at his government's ineffectual response has fuelled protests at home and abroad, including in New York where dozens of Nigerians staged a demonstration on Saturday demanding that more action be taken.

"The president has given very clear directives that everything must be done to ensure that these girls must be brought back to safety," his spokesman Reuben Abati told reporters after closed-door talks on the mass abduction.

The meeting brought together for the first time all key players in the search for the missing girls, from Nigeria's military and security service chiefs to Borno state's governor and police chief, and the head of the girls' school in Chibok.

Until now Jonathan had conferred only with his security chiefs.

The Nigerian government said it has set up a committee, presided over by a senior army general, to advise on a mission to secure the release of the girls who are generally between 16 and 18 years old.

Police on Friday said kidnappers were still holding 223 out of 276 girls seized from the northeastern school - higher than previous estimates of the number being held.

A Nigerian newspaper Sunday published an interview with two of the girls who got away, who told of their abduction and "desperate" escape.

"They came into our school and deceived us into believing they were soldiers," Thabita Walse told The Sunday Punch.

"They were dressed in military uniform," she said. When they discovered the truth, "it was already too late and there was little we could do."

"They were shouting and rude," fellow student Amina Sawok told the paper. "That was when it became clear to us that they were insurgents.

"Then they started shooting and set our school on fire."

Both girls told of how they summoned the courage to jump off the trucks driving them into the bush.

"Our vehicle developed a problem and they were forced to stop. I took the opportunity with some girls to run into a dark bush," Walse told the paper.

"I have heard a lot about Boko Haram, the bad things they do and how they have killed many people in the state," said Sawok. "I was afraid and I became desperate."

"I felt getting to their camp could be dangerous for me, and it would be better if I escaped. That gave me the courage to jump out.

"Immediately one of us jumped out, the rest of us just started following her."

The independent newspaper published the pictures of the two girls who said they were unharmed.

"I am OK and very strong physically," said Walse. "The only problem I have is that some of my friends are still held hostage by terrorists."

Boko Haram's name translates as "Western education is forbidden", and it has repeatedly attacked schools during an insurgency aimed at creating a strict Islamic state in mainly Muslim northern Nigeria.

The Islamists have set schools on fire, massacred students in their sleep and detonated bombs at university campus churches, but a massive kidnapping specifically targeting girls is unprecedented.

The abduction is one of the most shocking attacks in Boko Haram's five-year uprising, which has left 1,500 people dead this year alone.

A car bombing in Nigeria's capital Abuja on Thursday that killed 19 has fuelled fears the Islamist group may be shifting its focus outside of its historic base in Nigeria's remote northeast.

Promoted
Listen to the latest songs, only on JioSaavn.com
Desperate parents have called for Nigeria to seek foreign help to secure the girls' release.

US Secretary of State John Kerry vowed Saturday that Washington would do "everything possible" to help Nigeria deal with Boko Haram militants and bring the children home.